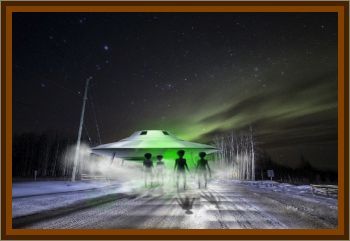 An electrician claims having been abducted by a UFO while traveling by car between two towns in southern Chile. Gabriel Encina, 47, states that the strange experience occured years ago, but that the anguish he experienced kept him from disclosing it until now.

The Abductee, Gabriel Encina said in an interview:

No one can keep me from thinking that I was abducted by something or someone. What I saw wasn't an airplane or a flying saucer, it was simply a very bright light that landed on top of my car.

Encina notes that he never discussed the subject, and that only his wife and close friends knew about it.

Encina continued: I know that others will call me a madman, In spite of the time that's elapsed, I'm still a bit affected by it. Ever since that abduction, I have headaches, migraines and bone trouble. I have difficulty sleeping, I'm afraid of dreaming, and when I close my eyes I see that light following me, moving slowly toward me.

Chile, a nation with a population of 15.5 million, ranks 5th among the countries having the greatest number of UFO sightings, after the USA, Peru, Brazil and Russia.

Encina recalled that the incident occured on June 27, 1996 at 8:00 p.m. local time, while traveling between Los Sauces and Angol in the La Araucania region, 380 miles to the south of Santiago, under clear skies and the damp weather characteristic of that winter season.

I suddenly saw a very bright white light some 10' in diameter, which appeared and descended and followed me. I accelerated, but curiously, the car lost speed, Encina added.

He said that when the light landed on his vehicle, the radiance was so intense that he could make out dust particles floating in the air.

That's when I felt anguished and passed out, said Encina.

According to Encina, when he awoke, both he and his car were some 7½ miles from where the encounter with the supposed UFO took place.

My legs trembled and my head hurt. I was surprised that my wristwatch had stopped at 8:05 p.m., even though almost an hour had elapsed since the encounter, Encina explained.

In mid April of 2001, Erasmo Mena, an expert with the Centro Informativo para el Fenomeno OVNI en America Latina, CIFOAL, disclosed the massive presence of UFOs between the cities of Angol and Victoria which could be seen by the unaided eye. Until 1990, Chile experienced over 400 sightings and the country's northern region was the scenario of a number of cases, such as so called close encounters of the third kind and the abduction of Cpl. Armando Valdes by the crewmembers of supposed flying saucers.