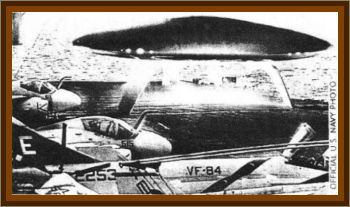 Location: At Sea in the North Atlantic

We were north and east of England with the NATO fleet in the North Atlantic. About 1:30 a.m., through the stormy rain and lightening, this big blue white light appeared right off starboard bow. It came down to 100' of the water and just hung there as we cruised by it. This UFO was easy to see when the lightening flashed. It then rose straight and left. Four of us saw it. Here's the kicker! General Ike, who'd flown over by chopper with the Admiral, had just come out on the signal bridge wearing PJ's and robe, looking for coffee. We were sitting and making small talk when the bright light came on. We all watched it ten minutes, then just stood there staring at each other. After a while, Gen. Eisenhower said, he better go check this out, and left. He also told us to forget about it for now. Next day and ever after, nothing was ever said about it. I don't know what it was or why it was hushed, but I saw it.