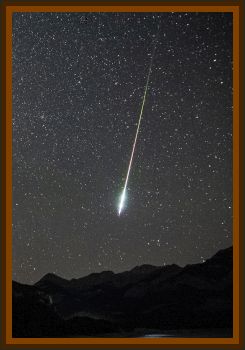 In the autumn of 1964 or 1965 while living in East Hartford, CT I observed a meteor fall in the northern sky from east to west at about 25° below horizontal.

I was startled by the fact that with the flickering of the meteor I also heard a buzzing/sizzlin/sputtering sound. I was shocked when I realized that the object must have been miles away yet I was hearing it as it flickered and the intensity of the sound followed the flickering exactly.

Later, I discovered that this is a documented phenomenon that is reportedly caused by a electromagnetic coupling of the energy given off by the meteor with the observers hearing system without any perceptible sound being transferred from the meteor to the observers ear, I beleive it is refered to as ElectroPhonic Meteor effect.