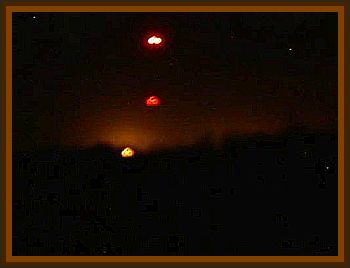 At 33 years old, I still think about my experience often. I was only 11 when in 1980, something really wonderful was about to be experienced, a UFO sighting.

It’s as clear to me now as it was 22 years ago. Was I dreaming? Seeing an illusion? Was it a meteor or a meteorological event? I’m certain it was not. How can I be so certain? I was with a friend who also saw everything.

We ran home to our parents to tell the story. The next day, Edmonton radio and newspapers claiming the phone lines were choked with similar testimony gave us credibility. Representatives from the University, who never witnessed the event, explained it as a possible meteor.

So here is what really happened:

Armed with a pair of binoculars, it was a clear summer starry night when my friend and I set out to star gaze. While break and enters where the hobbies of kids our age, we enjoyed astronomy. We actually wrote papers on the planets and studied the constellations. Call us geeks, but we found it exciting. Facing the northern sky, we settled into the side of a hill not far from my house where lights could be dodged. My parents were stationed in Edmonton for a 5 year term. Life on the Greisbach army base was, to say the least, boring, so the patience we had learned was about to be rewarded.

After about 40 minutes of just laying there, I happened to take interest at a red star in the east. I pointed it out to get his opinion. Although we both agreed it was just a star, I still kept a wary eye on it.

It wasn’t long before I was asking my friend to confirm if the star was moving. It seemed to be growing.

Awww, just a plane we decided.

He went back to gazing at other objects. A few moments passed and I nudged him asserting that it was no plane. Now we were both watching intently.

Then the most peculiar thing happened. A beam of light grew from it. Our mouths were fixed open in awe. I fumbled with my click camera, but was more interested in taking in the event. The beam of light grew long across the sky as it moved at a constant rate from east to west, well above the horizon, but not overhead. The distance was difficult to judge, but it seemed far yet near. Kind of like a Las Vegas building. They look near because they are so big. As it stretched across the north in front of us, stranger things appeared. 2 stars appeared on each side of the beam, and then another 2, and then another 2.

Then all stars did the same thing the original beam did. They stretched out thinner beams in front of them. The beams had bright lights at each end. They were positioned perfectly symmetrical. The middle beam was bigger than the surrounding beams. When the event was directly in front of us, again each of the smaller beams were surrounded by stars which then shot out their own beams. Now as the event passed into the west, which still had a bit of twilight, it did the exact reverse. Small beams collapsed into stars and into single beams and then the last big beam collapsed back down to a star which eventually winked out. The main event had lasted for only a minute, but it seemed longer. Chris and I looked at each other in excitement.

We stayed there for another half hour hoping for more. Our excitement got the better of us and we ran home to tell all. If anyone else has seen and remembers this, please contact me. I would like to compare notes. Also, I can’t remember the exact date but I would love to search the newspaper archives for this event.

It's possible the army was experimenting with some sort of transportation device;

But as I let my imagination take over, I think we witnessed an alien space probe passing by our planet on a planned mapping of our solar system. Think of it like a car coming down the road. At first you see a small dot, then it grows into a front and then as it passes you see the long side of it and then the backside and finally a receding dot. In this case the front was like looking at the end of a fiber optic cable and as it passed it looked like the whole fiber. It's so hard to put into words, but it was an incredibly fantastic event to witness.

Whatever it was, it was very big. If you ask my friend today, he thinks it was just a meteor. I saw some very cool big meteors with a long sparkly death, and nothing in that shower could even come remotely close to what we saw. It was not a meteor. Meteors do not have symmetry. Nor do they fill up the sky. But there was no doubt that it was not a meteor.

I had seen them before, this in contrast looked alien, moved slowly across the entire sky, and behaved mechanical. I also forgot to add that there was supposedly a very low engine rumble. I can’t remember if I experienced this or if I got this from the reports the next day. Like I said, we were too transfixed, all other non visual senses seemed to be halted.

I should also state that we were not under the influence of anything… we were 11. I have better things to do then tell wild stories.