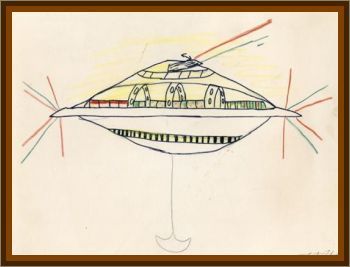 A 14 year old boy, who claimed to have watched an unidentified flying object for 4 hours provided the most detailed report of any UFO in the Edmonton area.

A bespectacled Ricky Banyard was walking to his south side home across from Mount Pleasant Cemetery at 2:00 a.m. the day before when he noticed a space ship, and began a vigil. He saw a white beamed light moving over the neighborhood and followed it over several blocks before it disappeared. He saw it a second time when he reached his doorstep and went and told his friend Glenn Coates who joined him.

We got some binoculars and watched it for a while.

When his friend had to go home, Banyard kept watching, then followed it into the cemetery where he hid beneath some trees. The spherical ship with red and green lights, and top and bottom portions that spun, was 200' to 300' in the air and made a muffled whistling noise as it hovered. A white ribbon of light came from the bottom of it and spread out in a rectangular shape about 6" above the ground. The ground was white, as though white hot under it.

When I stepped out from the trees for a better look, the light disappeared, then there was kind of a screaming noise like a jet starting up. All the lights in the ship went out and there were about seven or eight bangs and it took off.

Several rectangular black streaks that marked the sand gravel roads in the cemetery could be seen later that day. Cemetery foreman Joseph Laforge noted a grader had gone over the roads the day before and had exposed some of the cinder base under the gravel. But these ones here, he said pointing to two other large marks, I don't know about them...they look pretty unusual.

Banyard sketched the ship and showed it to several other people who said they too saw the ship or light beam, and all agreed that was what the object looked like.

Ricky's story attracted about two dozen UFO watchers to the cemetery every night for the next week. The first night, 25 grave markers were overturned. Most visitors carried cameras and binoculars and stayed 30 minutes before scrambling back into their cars, shivering.

Two days after Banyard's experience, a middle aged couple living in the same area, said they saw an object with red and blue flashing lights on its edges and a bright white light from underneath the hovering object. The object flew away when she went to call the local newspaper, reappeared five minutes later, then vanished again while she placed a second call to the paper.

Don't use my name, the women told a reporter. People will be calling me and accusing me of being a kook.

Ten days later, 29 year old Jack Strangman, a school janitor, reported seeing a whitish, oval-shaped object through binoculars around 11:30 p.m. over Mount Pleasant Cemetery. Two hours earlier, Norman Fibke who was working in his backyard in the area of 101st Avenue and 90th Street, said he saw a really bright, egg shaped object with two red lights at each end hover at the height of a plane, then come down at a terrific rate of speed before heading west and disappearing over Alex Taylor School. It definitely wasn't a plane, he said.