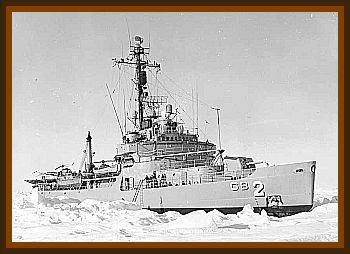 Air Force headquarters, Washington D.C., at the time of the sighting, sent the following teletype message to Blue Book at Wright Field:

As in many famous UFO cases, authorities failed to follow up leads to gain a better understanding of a possible solution. The BOAC incident is no exception. According to a story in the Washington Star, the crew of the icebreaker Edisto may have seen the same object as the crew of the BOAC airliner:

Two separate reports received at the Pentagon today mentioned the possibility of a mirage as an answer to the 7 weird black objects which reportedly followed a British airliner for 80 miles Thursday night near Goose Bay, Newfoundland and Labrador, Canada.

The reports came from the Navy icebreaker Edisto in Ungava Bay, which is north of the Canadian province of Quebec, and from the Northeastern Air Command with headquarters at Pepperell Air Force Base, Newfoundland.

It was not clear if the writer is referring to the BOAC encounter as the second sightings or a sighting by someone at Pepperell.

The Edisto reported sighting an object which was first identified as the planet Mars:

It appeared to change shape like a jellyfish, swimming to the westward, the report stated. It also appeared as a dart at times. No satellites seen.

Mirage effect had been pronounced during the day.

The Northeast Air Command evaluated the sighting as an unknown natural natural phenomena.

Note that this is the same explanation used by the Condon report, possibly a mirage as temperature inversion in the area made this possible.

There are problems with this reporting by John Giles.

First of all, no one is named. If it was a crew member of the Edisto responsible for the quote, no easy checking of the facts is possible. One might also believe it is someone in the airliner describing the UFO, but a careful read works against that.

No satellites were seen, and the UFO was going west, not north northeast, following the BOAC flight path to Goose Bay. Moreover, the statement about mirage effects during the day indicates a ship on station, not an aircraft in the air space for a few hours. One can't help be impressed by the shape changing comments by the apparent Edisto observer.

It's very tempting to believe the Edisto UFO was also the BOAC UFO. If true, that complicates the issue. The crew of the BOAC Stratocruiser viewed their UFOs to the port side and Ungava Bay was also on the port side of the airliner. For the Edisto observer to see the same mirage, he would have to look south southeast and would be viewing the back of the image. The optics involved in this solution seem impossible.

An interesting thought is that when the BOAC airliner turned northeast and approached Goose Bay, the BOAC witnesses had the impression the mother ship with its children aboard got smaller and smaller as if pulling directly away. If that was the case and the UFO was a solid object, its trajectory might take it over Ungava Bay.

The original Navy report and Project Blue Book files explain this as a mirage of Mars.