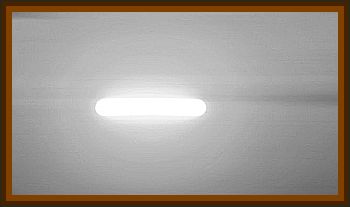 A husband and wife took the dogs out for a walk on the Braid Hills golf course following a path to the summit of one of the hills, the path then flows downhill into a valley, this is when they noticed what they called cellophane UFOs as you do not see it all, its like a large sheet of cellophane rippling in the wind above you.

Normally when they come across them they are small or look small, about 4 square yards. But in this case it seemed at least 50 square yards and then it was gone.

They continued their walk along the valley then across the green to the return path that is at the other side off the hill. At this time the man was looking up trying to see any other UFO and his wife had wandered about 30 yards in front of him when he saw her watching something on a green half way up the hill.

When he arrived beside her, she told him someone was watching them and pointed to the area. At first he saw nothing, and then a man came into view that seemed to bend over to do something. He was about 2300' from them so he assumed he was doing the same as them, walking a dog, so they continued their walk still watching his movements as it was midnight in the middle of nowhere so better safe than sorry.

As they followed the return path it took them up towards the green where they could still see what they took to be a man moving around on the green so even though it was quite high, he switched on his flashlight and highlighted his dogs. One a longhaired German shepherd and the other a cross between ridgeback and Great Dane, both large dogs. He then turned his flashlight off again and continued up the hill to the return downhill path to the car park, this took them about 50' from the man who at this time had turned and moved about 5' in their direction then stopped. They could now see him very clearly, his height was the first thing they noticed as he must have been over 7' tall, very thin, dressed in all black. It was then that he noticed that his wife kept referring to him as them, but as he could only see one person, he did not mention this at the time. They continued walking up the green, and then they reached the downhill stretch of the path. They must have been about 30' from the man so they stopped and looked at him and he just continued to stand still and look at them. This is when they could see that he was a lot taller than 7' he was big, but very thin. He then moved over about 6' and then stopped, and they just continued their walk down to the car.

It was not until he started the car and turned the lights on ready to leave that the whole episode became clear and they started discussing the event. His wife was adamant that there were 2 people, dressed in black, both very tall, even though he could only remember seeing one. The other strange fact is that they could not remember seeing a face, only a tall black human shape, with arms, legs, etc. He noticed a belt with what looked like silver buttons on it. Apart from that they cannot remember any other detail about the person. The other strange fact is that the dogs did not seem to notice him, were very calm, just wandering about as usual, and that is very unusual for them as they normally stick close when nearing someone and get defensive.

They both felt no fear and that is very unusual for his wife as she spooks very easily, and even though he had his camera with him he had no inclination to take a photo, yet this would have been the first move he would normally make.