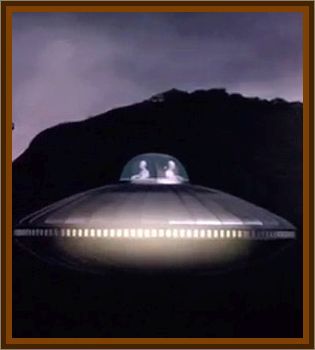 Mrs. Davis was in the northwest bedroom with her daughter, who was ill.

She was not sleeping soundly because she was making regular temperature checks. The exact date is not remembered, but the experience took place in the 1st or 2nd week of January 1969.

She suddenly found herself sitting up in bed and looking at the window, although no sound was heard. She had no idea why she suddenly woke and sat up. At the window, she saw an unusual looking object with an occupant in it who was looking in her direction.

Unable to believe her eyes, she pinched herself, hit herself, jumped up and down, trying to make sure that she was awake. She even ran into the bathroom and bathed her face. After returning to the bedroom, she sat down in the middle of the edge of the bed by the window, and once again, peered at the entity outside the window.

It seemed to be on a level with the window which would have placed it about 7' above the ground. When first seen, the occupant was about 6' from Mrs. Davis, and seemed to be working on something below the window and looking downward.

Mrs. Davis said that the occupant suddenly raised its head, its mouth dropped open, and there was a definitely surprised look on its face. It continued to look at her for a brief time, then resumed its work below the level of the window. After a short time, it looked up again and reached upward and to the right with its right hand for something which Mrs. Davis could not see. It seemed to her that it couldn’t reach whatever it was after, for it turned slightly and reached with its left hand. It then turned and looked at Mrs. Davis, and the object in which it was located, began to back slowly away from the house.

As it moved away, she could see a white light beam coming from the base of the object, projecting downward. It made a bend and illuminated a small cedar tree. This light was the only light observed by Mrs. Davis, except for the light from the interior of the object. No sound was heard at any time.

The object then moved back about 10' to 12', stopped, and the white light went out. After the object stopped, it started turning slightly and moved to the northwest, and as it turned, Mrs. Davis could see that the windows were tinted blue. The back side of the object was identical to the front, except for the window area. The frame around the window area was visible, but a shield covered the window section, which was the same color of the object itself, army green. A dark, vertical marking was observed extending from the top edge of the window framing.

Mrs. Davis again went to bathe her face and when she returned to the window, she noted that the leg on the far side of the object was about 3' off the ground, and the near leg about 5' above the surface. She could only see about half of the back side as it turned and the object was last seen as it moved slowly northeast at very low altitude, just above the ground, and it disappeared behind the corner of the house.

After the object left, Mrs. Davis went into the living room and smokes a cigarette. It was at this time that she noted that the furnace fan, which is on automatic and runs constantly, was not operating. A minute or so after she sat down, it started running again, indicating to her that the electricity had been off.

The next morning, Mrs. Davis found that the electric clocks were twenty minutes slow. She checked with neighbors, but they reported no electrical failure.

Mrs. Davis was not frightened by the episode and went to bed and slept soundly after the object left.

The morning after the incident, Mrs. Davis felt extremely nervous, a condition which persisted throughout the entire day.

Mrs. Davis described the occupant as wearing dark clothing with a cap resembling an army fatigue cap. No hair was noted and the eyes, rather slanted and wide spread, had fuzzy or indefinite pupils. It wore a dark jacket with an opening down the front and a small upright collar with scalloped edges and a scarf.