UFO Seen From US Navy Ship 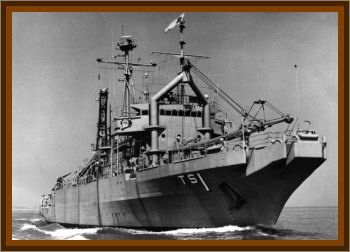 While in the US Navy in the summer of 1986, I was standing lookout aboard the USS Edenton ATS 1, currently decommissioned.

The lookout watch, stood outside on top the bridge of the ship, and was responsible for reporting all contacts seen both in the water and sky.

It was around 11:00 p.m. one clear night at sea, located about 50 miles off the coast of Cape Hatteras.

During one of my scans of the night sky, out of nowhere, 4 red circular lights appeared. The lights where hundreds of yards apart from each other and formed a square. At first, I thought it was 4 separate air craft, such as, military helicopters because the lights were stationary. However, due to the distance from the ship, the lights where too large to be aircraft running lights.

There were also no other normal running lights like green and white, which make up the normal outline of an aircraft seen at night. The lights where located about 20° above the horizon and about a mile away from the ship. Again, these red lights were each about the size of a small plane, which were very bright and visible in the night sky, which was clear, a full moon, and a moderate amount of stars were visible, which also aided in calculating the distance and size of these lights.

When I first saw these lights they were all unvarying in the sky and appeared out of nowhere. Once I noticed that these were not normal lights, grouped in a square and not moving, I called down to the bridge over a salt and pepper line informing the conning officer of a possible UFO sighting. This brought laughter across the wire at first, but I relayed the contact again in a stern but excited voice, which succeeded in getting the bridge officers attention. After relaying the contact information a second time, the lights, in a flash, darted towards the horizon amazingly fast. The lower two lights in the square went first, with the top two lights following directly behind them in a curved swooshing motion, there was no sound.

Then all four shot straight up into the sky, and out of sight, all within a split second. At this point, I felt very excited and shocked, and was personally praying someone on the bridge had seen what I just saw. Having been an avid watcher of the heavens, seen shooting stars and a believer in that life has to exist somewhere out there, I become even more excited because I knew, I just saw my first unidentified flying objects.

To my amazement, when I returned to the bridge after my watch, I was very pleased to learn that the conning officer and everyone else on the bridge had seen this sighting and logged it into the ship’s log as a UFO sighting.

After a half hour had passed since the sighting, the radiation detection system, gamma roentgen meter, on the bridge started making a loud clicking sound. At first, no one seemed to know what was making this sound then a very loud bell went off notifying us as to what was going on, we were being radiated.

When the instrument stopped clicking, it indicated we had taken a hit of 385 roentgens in the period of about one minute. At this point, the captain of the ship was awoken and called to the bridge, as well as the chief in charge of the radiation metering equipment onboard ship.

The captain was not impressed with an entry of a UFO sighting being placed in the ships log, and at first, took the roentgen meter as being defective. However, the chief informed the captain that the meter had been serviced and calibrated the day before, and that other like meters throughout the ship had just gone off indicating the same amount of roentgens received as the bridge.

The captain stated not to log the instance concerning the radiation exposure and left the bridge. During the rest of my watch duty that night, no officer or enlisted person spoke of what happened, and also acted liked nothing happened. This experience, however, was etched into my memory as if it happened yesterday and I have told this story to only a few people, people who I thought would believe me. This is also the first time I have documented the events of this night.

In conclusion, as an indication of the strength of gamma radiation, I and others received that night, all the personnel during the Project Trinity experiments conducted in 1945 at ground zero, only received between 1 and 6 total roentgens of gamma radiation. This leads me to believe, we traveled through the wake of radiation produced by the UFOs seen 30 minutes earlier.