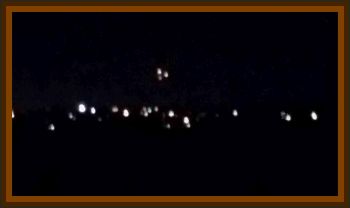 I’ve worked as a security guard for 6 years,and worked on many job sites around surface mines in McDowell County and Wyoming County.

One job site I worked was at the Eckman Page surface mine. Where I sat in a guard shack at the top of the mountain at a crossroad. I enjoyed working there because it was so remote.

One Sunday night, at around 10:00 p.m. I had to go outside and relieve myself. It had been a very clear night, and there were only a handful of workers on the job site at the time. I had read for most of the evening, and like most nights it was pretty uneventful.

Until I went outside to relieve myself.

When I went outside I immediately noticed large bright white circular lights in a W formation of 5 distinct circular strange lights. It was completely silent, and moving very slowly towards me. I ran back in the shack and called my wife. I checked the CB, 2 of the rock truck drivers had noticed it as well.

I stepped back outside still on the phone with my wife, and watched the things slowly float past me. They were about 20' to 30' above the tallest tree, and I would estimate all 5 of them were about half the length of a football field. I’m not sure if it was one craft or 5 separate craft.

The light was very intense almost like daylight, or being under really powerful flood lights. I watched them float right on by for probably 10 minutes or so until they disappeared out of my sight over the ridgeline that would be in the general direction of Anawalt. I could still see them clearly from more than a mile or more away before they disappeared. I stayed on the phone with my wife entire time.

When I spoke to the rock truck drivers they laughed it off, but I’m sure they saw it as well.

I’m a skeptic, I don’t believe in aliens or ghosts.

This is the closest thing I’ve ever had that falls into the realm of the paranormal in my life. I’m not sure if I saw some sort of top secret government planes or blimps, or if it was a UFO. I’ve never seen anything like it since, and I’ll never forget what I saw.

I would be interested to know if anyone else sighted the same thing. I’ve kept an eye on the sky since then, and have never seen anything that resembled what I saw. The strangest thing was how low to the ground it was. That’s my story it’s the truth.