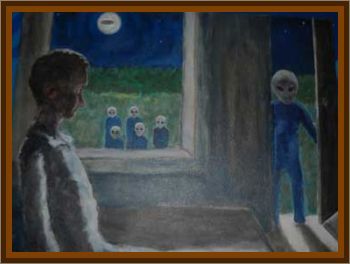 A five year old witness was out in the fields in order to bring the cows home for his father to milk, as his brothers and grandfather fed the rest of the livestock. Suddenly near the farm a very large object white in color and oval shaped landed on the road in front of him.

The boy could feel warmth coming from the silent object. Somehow the witness did not feel any fear and approached the object, touching it. It felt cool to the touch, despite the heat. His next memory was of seeing two people come towards him and stand in front of him, one of the figures who was wearing a blue shirt and white pants extended his hand out to the witness and then led him to a doorway on the side of the landed object.

His next memory was of standing in the road with his cowboy boots in his hands and his grandfather running to him asking where had he been, it was already 1:30 a.m., 9 hours later. He tried to tell his grandfather what had occurred but his grandparent told him to keep quiet about the whole thing. Later his grandfather told him that while searching for him he had seen a flash and then saw a bright object lift up and take off at high speed, when he ran to the location he found him standing on the road holding his boots. The witness only has brief memory flashes of what occurred inside