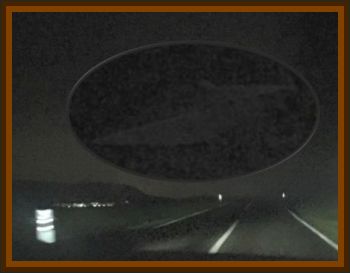 I had purchased my first car and thus know the date of this event.

Was driving from Arkansas to Edgewood Arsenal, MD, where I worked.

I was following a car containing 2 people who were motioning toward an object hovering over the highway approximately 2 to 3 miles away.

They stopped on the shoulder and so did I. We watched the object remain motionless over the highway then go off away from us instantly.

I did not know the names or homes of the other two witnesses.

When I got to Maryland, the Sunday edition of a Baltimore Sun newspaper had a photo on the upper right corner of the front page in which the same shape object was shown in the distance over a house which had a chimney.

In or about 1990, I tried to locate a copy of this newspaper and was told by the newspaper to contact the Maryland Archives which I did. They responded to my inquiry that the photo to which I referred had been blacked out of the microfilm image with a notation of a security step, which was totally stupid to me.

The object was like the typical drawing of UFOs of a disk shape and was at an angle of about 30° off horizontal.

There were no observable lights and no sounds.