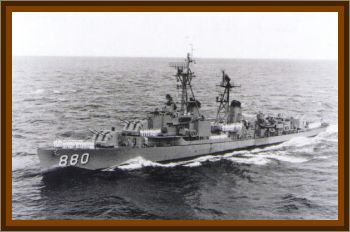 USS Dyess DD-880 was on a shakedown cruise to Gitmo (Guantanamo Naval Base) in Cuba. The captain called all hands on deck and called for the special sea and anchor detail. We were headed right for a Copper Top and Silver Body UFO that we were tracking on Sonar and Radar. We were heading for the thing at 20 Knots. Most of us were either confused or scared. This thing was as big as the Forrestal Aircraft carrier. Not in height but, in length and we could see it from 10 miles away. All of a sudden the thing started to move away from us at incredible speed and we lost the "contact". The captain said he would log it as another "unexplained mystery" of the Bermuda Triangle.

Apparently the captain knew more about the place then we did. I was nineteen at the time and have been reliving that experience almost every day since we saw it. By we, I mean every man on the Dyess that wasn't on duty. Maybe 200 of us. I know many of us have passed away. The captain and the XO and several of my ship mates.

I've told people about the experience and they just snicker. I was interested in finding out if the logs of the USS Dyess were researched by you or the incident had ever been made public. The evidence would be in the logs of the Dyess from the spring of 1967 entries under CDR Frank C. Mead, USN. Captain USS Dyess (known as the Steamin Demon) a Fletcher Class Destroyer commissioned 21 May 1945. The image of the "contact" has never left me and would like to know if the Captain ever made an entry or if he was afraid to tarnish his great reputation with such an entry.