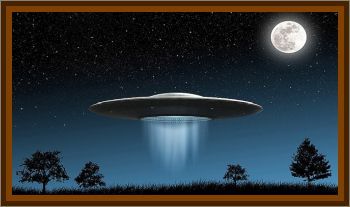 I got scared of a UFO only once. It was during a 1980 expedition to Kamchatka when we saw a strange disk landing near a 300' deep lake bottom, reveals Valery Dvuzhilny, one of Russia’s most notable specialists in the investigation of unidentified flying objects.

Dvuzhilny, a biologist by occupation residing in a town of Dalnegorsk some 300 miles north of Vladivostok, made investigating UFOs the main purpose of his life.

In his four-room apartment, the scientist has established a laboratory equipped with obsolete Soviet-era tools and a collection of about 1,000 samples of materials found at nearby sites where at least one UFO is thought to have touched down.

Dvuzhilny was the first to suggest that space visitors use geological fissures in the planet’s crust to orientate themselves with Earth before descent. Dalnegorsk County, which is considered the most anomalous zone in Primorye and is also notable for its 14 caves, is located on a geological “break” that contains a field of powerful electromagnet and gravitational energy. The counties of Ternei and Olga and the city of Arsenyev are also locations of interest for UFO researchers, with more than 10 unexplained sightings in the past 20 years.

According to Dvuzhilny, on January 29, 1986, a UFO was observed in the Vysota-611 Mountain near Dalnegorsk. Burnt fragments found at the site revealed the rare-earth metal lanthanum and silicon shales discharging magnetic radiation.

In 1995, Dvuzhilny participated in the International UFO Conference in California, America. Pavel Reshetnikov, head of the anti-aircraft forces in the Russian Far East, was also invited to the conference but was prohibited from leaving Russia because of his military status. However, he later confirmed that a UFO was tracked by radar over the Amur River in the early 1990s. According to Reshetnikov, the object could not be identified as either a missile or a plane.

Each sample found at the Dalnegorsk site has been subject to multiple scientific tests, including isotope analysis. Of the samples found 30 miles away at the Krivaya River, dozens were proven to have been burnt at a temperature exceeding 2000° C (about 3,800° F). According to Dvuzhilny, thorough analysis of burnt metal pieces found at sites so remote from each other suggest they were affected by extra-terrestrials, who may have been interested in them as sources of lead and silver.

With his modest laboratory tools Dvuzhilny lacks funds to perform his scientific activities. To conduct an isotope analysis in Moscow costs $1,000, but Dvuzhilny, who earns very little money teaching students at an ecology club, does not give up. He is an ample enthusiast, as are his colleagues at the Science and Research center Kosmopoisk(Search of Cosmos) where Dvuzhilny works as a coordinator.

Dvuzhilny, the energetic sky watcher featured in both Japanese and American documentaries, is currently planning an expedition to the Amgu territory, and dreams of creating Russia’s first UFO museum in Dalnegorsk.