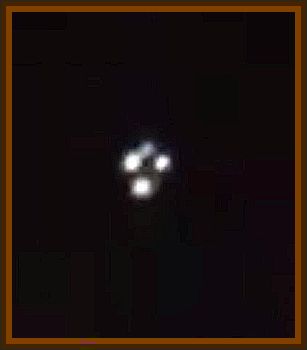 A mysterious object was reported in the vicinity of the Biscayan town of Apatamonasterio at around 9:30 p.m.

A 14 year old boy was returning home when he saw lights in the sky that attracted his attention. He saw something in the far distance that didn’t seem like an airplane and had different lights, aside from moving at faster speed.

According to his testimony, the alleged UFO changed directions just to go right back the way it had come, losing itself in the night toward Durango.

Word was received of the incident a few minutes after it occured, and those informed did not hestitate to spend nearly 2 hours traveling around the town, stopping at various locations, in the hopes of finding the object, but all efforts were in vain.

A photographic scan performed on the area did not yield anything of interest, either.

A week later we ran into a woman, almost by sheer coincidence, who told us of her own experience. It seems that on the very same day of the event, and at the same time 9:30 p.m., she observed 3 small white lights that appeared to be stationary in the sky.

The woman is unsure if it was a single object with 3 lights, or 3 small objects in formation.

Months ago we had already been told of certain events occurring in areas of Bizkaia and Guipuzcoa pertaining to luminous spheres and triangular obejcts, which reminds us of the UFO flaps experienced in the Duranguesado in 1995 and 1997, and which became known through the communications media, such as Radio Euskadi, Euskadi Irratia, Enigmas magazine, Durango Irratia, the Deia newspaper and other media specializing in the paranormal.

At this time we are engaged in learning of new sightings and are attempting to locate new witnesses to the aforementioned events.