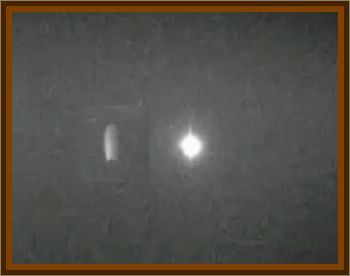 We were having our tea last night around 5:45 p.m. and I noticed the Crescent Moon and then I noticed a really bright light that we thought was a UFO although with a little bit research learned was Venus as despite having a slight knowledge, of the night sky.

We got out basic binoculars and had a closer look at Venus. To our amazement, and only through binoculars we could see a saucer shape object hovering horizontally, just left of Venus that was grey in color and illuminated and sat stationary in that position for at least 5 minutes as we all took turns with the binoculars.

As I took about a minute trying to take a photo using my Iphone through the binocular lense attached, when I returned to observe the object again through binoculars it was now on the right hand side of Venus and was no longer stationary and now moving, still horizontally, about the same speed as an aircraft appears to fly through the sky ,and then disappeared or fizzled out about the same distance we had first observed it left of Venus but now on the right.

Strange thing is, as when I looked at the picture on phone, and as can be seen, the object appears to be pointing vertical and it definitely was sitting horizontal and stationary whilst I was trying to ready the camera as my wife and daughter confirmed.

We are not UFO hunters and our attention was mainly drawn to Venus as it was really bright last night in the southern sky. My wife suggested that it may appear vertical in the picture if I maybe took pic at wrong angle, although the tree line is visible so that can’t be explanation?

1 pics taken on Iphone showing Venus and said object to the left and is also in focus quite well as we seen. Two other close up captures of the original pic also attached. Any help would be great to possibly explaining this for us, as you couldn’t see this object with the naked eye and I think I was lucky to capture the image through a basic binocular lense with the Iphone too as it is clear as looking through the binoculars.