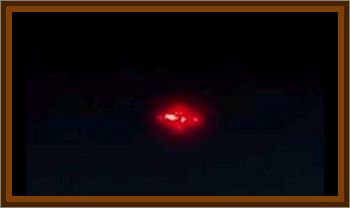 At 12:55 a.m., Patrolmen LeRoy A. Arboreen & B. Talada were on night patrol, cruising west on Center Street. From an area elevated about 15' to 20', they had an unobstructed view to north, south, and west.

In a signed report to NICAP, Patrolman Arboreen, ex Navy man and graduate of the New Jersey State Police Academy, described the experience:

This object came at us from the west. At first, it looked like a red hot piece of coal about the size of a quarter held at arm's length. In a matter of seconds, it was as large as a ruler held at arm's length. That is when it came to a complete stop. The shape of the object was distinct. The body of the object was solid bright red and it gave off a pulsating red glow completely around the object. The object hovered a few seconds, then made a left turn and again hovered for a few seconds, then went straight up like a shot. We watched it until it completely faded beyond the stars.

In this matter of fact manner, the two officers described an occurrence which is totally inexplicable. Meteors do not hover or shoot upward. No known aircraft is elliptical, and glows bright red in flight, not to mention the observed performance.