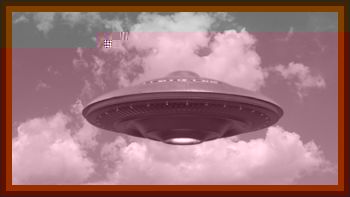 When I was about 15, my aunt who lived just up the road from us called one night and asked if I had seen the UFOs in the sky north of us.

Now for reference at the time our home was about 25 miles South of Dayton Ohio and Wright Patterson Air Force Base.

So I thought this was something that they were flying. She had told me she saw these 3 objects the night before and saw 3 jets come towards them and they all split up and disappeared.

So I went out back with dad’s binoculars and tried to see what these flying objects were. They were very high in the night sky there were 3 objects just as my aunt had said and they were just sort of dancing around in the sky, not moving like an airplane or jet. After watching for maybe 5 minutes, here come 3 jets flying toward them.

All 3 objects immediately split up and flew in different directions. One headed toward the area we were at. Mom and dad were outside with me and mom says let’s drive into town and see what we see. So off we go, and as we got into our town we noticed we were really in a valley that didn’t give us a very good view of anything.

Mom pulled over into a parking lot and we got out of the car hoping we might see something in the distance. I was looking toward the east side of the road when mom said there it is. I turned around and looked up to see this incredibly large triangle shaped craft slowly moving toward us. It was so low I felt as though I could throw a tennis ball and hit it.

It glided silently right over top of us and I look up at the bottom of it with the binoculars I still had with me hoping to see anything like nuts or bolts or markings. I saw nothing. From the time mom saw it till it passed over us was probably only 30 seconds. As it headed east it had to climb up a bit because of a large hill past us.

It climbed up floated past the hill and within another 30 seconds it sped up and out of view. I have no idea how fast it was going but imagine a jet flying past you and how long it would be till you can’t see it anymore.

It was really moving. That was over 45 years ago and mom and I have never talked about that close encounter. Don’t know why, we just haven’t