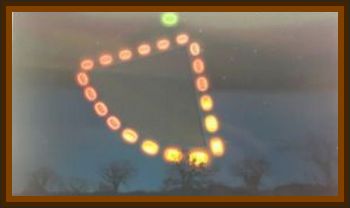 I was at a Prep School, Junior year, in Dublin, NH.

I was on our upper field with 5 friends when the event took place. I was not the first to notice the object.

At this time I don't recall who actually saw it first, however, what I saw was basically triangular or an arrow in shape.

It was heading in a northerly direction. It had a series of lights on both sides, window shaped, in 2 rows, over and under. They were somewhat rectangular.

When it passed over, not directly over, I noticed the back had what appeared to be a series of lights moving towards the center from the outer ends. This was continuous. The underside, if memory serves, had I believe 3 lights, equally spaced.

I also recall that it made no audible sound. At least none that we or I could hear. At first we thought it was some kind of a plane, however, once it got closer it became obvious that it was no plane that any of us had ever seen.

We were also nowhere near an Air Force Base or airport.

The closest was Pease which was about a 2 hour drive east.

I hope that this is of interest. I never gave it mush thought after that until recently. I read a few articles on the internet and it reminded me of the occurance. All the best.