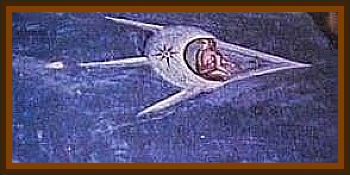 A common theme in ancient folklore refers to mysterious sounds in the sky reminding terrified people of the passage of dozens of men on horseback riding at full speed, with their dogs and servants, leaving enormous destruction behind.

That summer the weather was very dry, with numerous forest fires and many deaths. In Polotsk people heard great noises in the night, seemingly of devils galloping along the streets. Later they manifested during the day on horseback, but the only visible part was the hooves of their horses.

Another version of the text (Radziwill’s) suggests that “the people of Polotsk are devoured by the dead,” showing ambiguity between the deceased and demons. It is related in the Povest’ vremennykh let, usually referred as the Nestor’s Chronicle or Chronicle of Bygone Years.

The following text was extracted by Yannis Deliyannis from the Laurentian codex which includes the oldest versions of the Povest vremmenykh let:

Apart from the manifestation of demons in the streets of Polotsk, the reference to the appearance of a great circle in the sky is of particular interest.

This year there was a very peculiar prodigy in Polotsk. At night, a great noise was heard in the street, demons ran like men and if someone went out of his house, he was hurt right away by an invisible demon with a deadly wound. No one dared to leave his house. Then the demons manifested themselves on horses in plain day, they could not be seen themselves but only the hooves of their horses. They also hurt people in Polotsk and in the neighborhood.

So it was said:

There are ghosts killing citizens in Polotsk. These apparitions began in Droutchesk. Around this time a sign appeared in the heavens. A great circle was seen in the middle of the sky.