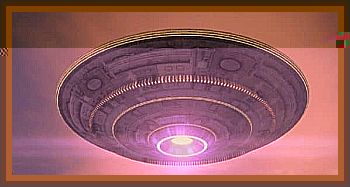 Two young men from Draguignan named Pierre Calafat and Andre Bouchaud, members of a dance band, go to an isolated house which they have rented. When they drive up to the house, they observe a large reddish disk, flying around above a vineyard beside the house, about 500' from them.

They park and watch the UFO performing zigzag movements, and then see it come to a halt at a height of 30' or so above the ground and only about 150' from them.

Many investigators of the UFO phenomenon have already noted that certain places seem to be more favored than others by this type of manifestation. Examples of such so called repeater cases, or repeater places, have been emphasised by Jacques Vallee in the USA, by Aime Michel in France, and by Antonio Ribera in Spain.

Lumieres Dans La Nuit has carried material concerning certain regions in the Departement of Doubs, extreme eastern frontier of France, adjoining Switzerland, which seem to be frequently overflown by UFOs, or which have been the scene of particularly interesting landing cases.

We have now discovered a similar site in the vicinity of Draguignan, in the Departement of Var, S.E. France. Lumieres Dans La Nuit, Contact Ixctcurs, No. 4, November 1971, carried an excellent report by Messieurs Jean Chasseigne and Francois Moll1 on one of the Draguignan sightings, which had taken place on March 29, 1971.

I will recapitulate the facts briefly:

Two young men from Draguignan named Pierre Calafat and Andre Bouchaud, members of a dance band, go to an isolated house which they have rented for the purpose of practicing there. On the evening in question, these 2 are the first to arrive. As soon as they start to drive up the little road leading to the house, they notice a reddish light overhead.

Then they observe a large reddish disk, having the shape of a plate, flying around above a vineyard situated beside the house and at a distance of some 500' from them. They park in the forecourt and watch the UFO performing zigzag movements, and then see it come to a halt at a height of 30' or so above the ground and only about 150' from them. 2 minutes later, the craft performed a roll and headed away towards Flayosc, which is in the same direction from Les Nourradons as Valensolc.

It was not until September II, 1971, that we found the traces left by this UFO.

These traces are in the field which adjoins the vineyard on the north. The grass there is long, of the graminaceous sort, and very thick. When we found the marks they were so fresh still that they could not have been made in March, but much later, and in any case they could not in all probability have been more than 2 weeks old.

The chief mark is a perfect circle with a diameter of 36'. Inside this circle the grass is discolored. The vegetation is flattened only along the periphery of this circle, or, to be more precise, the grass is swept in an anti-clockwise sense. The width of this flattened ring is about 2'. Tnere were no holes in ihe ground, and no marks that would indicate that an actual landing occurred. To the east of this principal mark there was a second circle, about 3' in diameter, and presenting the same discoloration of the grass. The distance between the large circle and the small one was 3'. A Geiger check for radioactivity gave a zero reading.

In the vineyard itself, we found no burn marks.

2 trees, an almond tree and a cherry tree, were dead, still in bud. But as the analysis has not yet been carried out, we do not know whether these trees died of some disease, or as a result of the UFO fly over of March 1971.

While looking through the archives of the newspaper Le Provencal, Var edition, we found a UFO sighting report of 1965. And the place overflown is the same.

So it looks as though there might bs a good many areas in which the UFOs have the greatest interest. We shall have taken a big step forward when we are able to know what it is that attracts them to these places. In the meantime, we are going to concentrate our UFO detectors on this area of Les Nourradons, which has been the scene of a wave, or perhaps one should say, a cluster, since 1966. Maybe we shall get some valuable information. At least, that is, if our unobtrusive visitors are good enough to let us have the necessary time for it.