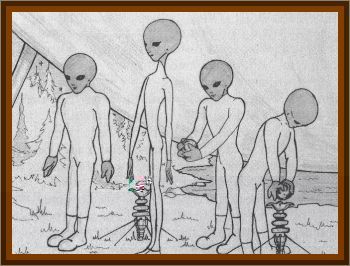 I am trying to find out if anyone has ever reported what I saw, which was silver monkeys that were about 3' to 4' tall.

I was 5 years old at the time. I had an astounding memory, so I know this wasn’t made up or imagined.

I was spending the summer at my aunt and uncle’s summer house on Pretty Lake in Dousman, WI. The property bordered the lagoon portion of the lake.

I was playing in the sand at the front of the house which was parallel to the lagoon. At some point, I got up and walked to the side of the house that was facing away from the lake. I saw about 5 or 6 things standing on top of each other trying to reach the bathroom window. The window was just a small opening that opened outwards and opened from the top, not the bottom. I was shocked that these silver monkeys were trying to get into the house. I started running to go into the house and tell my aunt, and then everything went blank.

I had several more unusual experiences that summer.