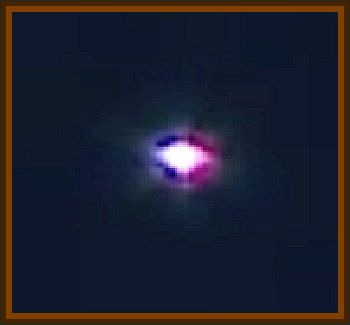 I’ve attached a composite with my limited ability on computers. The exterior paneling goes go all the way around the object and this was what was causing the bright light blue/white glow, the inner circle of lights is close to what we saw with the only colors being red, green, yellow, & white, all of these were constantly flashing and the black interior occasionally flashed similar lights intermittently here and there. The exterior paneling was constant light.

At the time we had only been married a year and I was not long discharged out of the army and we were staying at my wife’s parents home at Dorrington. A suburb next to Ashgrove. It was drizzling rain with low dense cloud cover.

Just as I was about to get into bed, the bedroom window lit up like someone had turned a huge spotlight on. My wife said what is that so I opened the window and I could see this bright light coming up from the south just above the clouds.

I told my wife what I saw and I remember issuing an expletive, holy bloody hell, quick Noela, look at this.

The object had come below the cloud cover and we couldn’t believe what we were looking at. This huge disk shaped object with very bright light around it’s circumference. It was travelling very slow, about 20 miles an hour, then the noise started.

It was a screaming high pitched sound which had my wife in agony, hands over her ears and crying with pain. It didn’t worry me as much except it was irritating headache material. As suddenly as it started the noise stopped as it went over the house. We raced out to the front patio and looked straight up at it.

That’s when we saw the other colored lights on the inside. It was only about 200' above was, moving slowly north and would have been somewhere between 200' and 300' wide. All up we observed the object for between 5 and 10 minutes as it eventually disappeared in the northern sky.

It was not spinning either. The funny thing about this is that no one else heard anything in the house and no mention of it appeared in any paper.We decided to keep quiet about it at the time. We moved to the next suburb out which is The Gap were we are still living.

One sideline to this is about 3 years ago I was having a few drinks with a friend of mine at The Gap and I mentioned that I had seen something strange in the night sky back in 1965 when I was living at Dorrington. He looked at me and said January 65?

About midnight on a Saturday?

I was watching it, he said, It came across Mt. Coot-tha above the clouds, very bright then when it got to about Ashgrove it dropped lower and continued north.

I said to him:

Did you tell anyone at the time?

Why bother, no one would believe it.