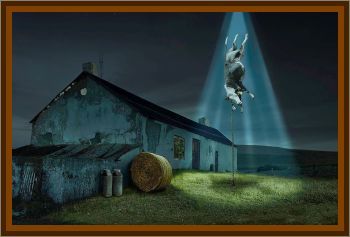 One of the few UFO encounter cases which also involved animal mutilation occurred in May, 1973, and involved four women. Judy Doraty, Judys daughter Cindy, Judy's mother & sister-in-law would have the most terrifying experience of their lives. After playing Bingo in Houston, the 4 were returning to Judy's home town of Texas City, but first going by Alto Loma to drop off Judy's sister & brother-in-law. After dropping them off, the remaining four saw a strange light, which seemed to be hovering in the night sky. It was intriguing enough that the women stopped, and got out of the car to get a better look at the source of the light. They watched in awe until the light disappeared. They then resumed their trip to Texas City.

Eventually, Judy began to suffer from extreme headaches and anxiety. After being seen and dismissed by several doctors, she was referred to well known Ufologist and hypnotist Dr. Leo Sprinkle. Sprinkles previous experience with the UFO enigma led him to recommend hypnosis as a way to relieve Judy of her emotional trauma. There can be little doubt that Sprinkle suspected an abduction from the beginning. Under hypnosis, it was revealed that Judy had apparently been at some time abducted. and taken aboard an extra-terrestrial spacecraft. Judy went on in detail, describing how a cow was taken up into the craft and methodically mutilated by two small entities. During the hypnotic regression, Judy described the unusual sensation of being in 2 places at once. She said that she was still standing beside her car after they stopped to watch the strange light in the sky. However, Judy also said that at the same time, she was in a strange chamber watching the gruesome experiment unfolding before her eyes.

In a 1989 interview on 21st Century Radio, Linda Howe divulged what had been learned from the experience of Judy Doraty:

Judy described, in a pale beam of yellow light, a small brown and white calf being taken up into a craft. Then, in an extraordinary way, she was inside the craft, and she watches the calf have pieces of it excised, the tongue, the sex organs, the eyes.

Some of Sprinkle's hypnosis session is included:

Sprinkle asks, Is there anyone around you?

There was this long, almost 45 second pause, and then she said: two little men, who were about 3½' to 4' tall, grey creatures with large egg shaped heads. It's like a spotlight shining down on the back of my car. And it's like it has substance to it. I can see an animal being taken up in this beam. I can see it squirming and trying to get free. And it's like it's being sucked up.

She then went on to mention seeing her daughter Cindy on an operating table.

It would be a number of years later when Judy's daughter Cindy would also undergo regressive hypnosis. Her session only corroborated her mother's.

First I must say there is no doubt that abductions exist.

My abduction took place in 1973. There were 16 eye witnesses to the craft, though not all remember an abduction. My daughter who was 14 at the time and myself. This was first reported to Ellington AFB in Texas, who denied anything was on radar at the time. Our abduction was also returning from a bingo game in Houston, to our home in Texas City, first going by Alta Loma to drop off sister and brother in law.

There was another sighting of 3 people coming from a bingo game in Houston that got burned by the effects of the sighting. Our sighting was almost a year before theirs.

So much happened that night I would not attempt to go in detail, we were all altered, and have never been the same since.

We were first ridiculed so much by others who were not present, family mostly.

I did not talk about it for a few years. Then my husband returned home from Viet Nam and we were stationed in Yuma, AZ. I somehow heard about APRO. I called them and told them about my sighting and the very next day, a Mr. Daugherty his wife and a doctor who had experience in hypnosis named Rose Tennant came to my house and spent the entire day going over what happened.

Dr. Tenant regressed me and a few details came out, or shall I say surfaced. I had been having terrible migraines, and just the amount of surfacing relieved much. I know I remembered a formula that was given to me by the small gray alien. I think that is what caused a lot of problems.

I did not say anything to anyone else as I was still gun shy and afraid of ridicule. A few years later I got a call from a lady named Linda Moulton Howe. We talked a long time with her trying to convince me I needed to be regressed again for a TV documentary she was doing. For some reason I began to trust her as she convinced me she believed what I was saying. And as all abductees know this is one of the most important things to help one get on with their life.

In my abduction I witnessed a small calf being transported to a large craft. At that time I somehow was teleported or astroprojected or something, as I was in the craft seeing what was going on as well as standing by my car I had gotten out of to see what the huge light was that had been pacing our car for about 20 miles or so. Anyway I allowed a Dr. Leo Sprinkle from the University of Wyoming to do his regression. It was about a 3 hour regression, I fulfilled Ms. Howe's agenda she got an Emmy for her documentary, but I was left with all the information in my head that still needed syphoning.

I asked her to help me write a book to be able to tell the amazing things that I was told and shown. She agreed and then kept putting it off. Both her and Dr. Sprinkle used my case for their own agenda and had little else to say to me. I guess I am trying to warn all of you to be careful who you trust. My main concern was I always wanted my abduction to be presented in a way that it would not be construed as a crazy woman venting her boredom. Again I pulled myself in a shell and talked to no one. I was contacted by Sightings to do a follow up, and I called Linda Howe she told me it would make the story unbelievable to the average person and I should not do it, so I turned them down. Later I learned she had a rift with Mr. Winkler and that was the only reason she did not want me to be on the show.

About 10 years ago I was told by someone in the UFO community who was familiar with my case that Ms. Howe had gone to Kirkland AFB was warned to keep my mouth shut but Ms. Howe never told this to me. She told a ufologist who called me. In other words the government did not want me to say anything about a formula I was given. I became frightened and this is the first time I have shared anything. I hope some one reads this that will contact me and give me advice or help as the abduction is 30 years old, I am 63 and before I die I would love to know what many already know, and why they do not want my story told...thanks for listening.