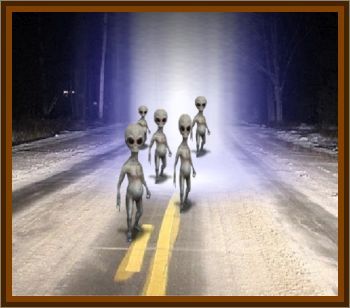 Mr. and Mrs. De Wayne Donathan, were driving east on Indiana State Road 26 on their way home from a visit with Mrs. Donathan’s, Donna, mother. Donna was driving and De Wayne was holding their baby. They were about one block from their home when the car rounded a slight curve and a small hill.

On the road ahead, they saw what they thought at first were two small children about 4' tall, moving about on the road. Mrs. Donathan stopped the car about 30' from them, and with the headlights shining on them, she decided they couldn’t be children. She said:

They looked confused and they would hop up in the air. Their feet would come up slowly, one at a time and the arms would flop funny. They moved slower than humans and their feet and arms would go up funny. Their feet came off the ground easy and they were bright silver in color.

Mrs. Donathan’s description is of a figure with slight build, straight in form to the ground, and she doesn’t remember a head. But her attention was attracted to the feet which appeared as boxes, square shoes, in other words. She did not detect any hands nor does she recall hearing any sounds, but she had the tape player going fairly loudly and the engine running, so she could not be certain that no noise was being made by the creatures.

When she realized that she was confronted by something quite out of the ordinary, she became frightened and screamed:

Mr. Donathan’s description of their experience closely parallels that of his wife except that he got the impression that the little fellows were dancing. He at first thought they were little kids dressed in aluminum foil, but wondered why they would be out on the road in the country, at that time of the night.

He said that when his wife panicked and sped off the road they moved in a slow skipping motion with arms swinging slowly. When his wife screamed and veered around them, Mr. Donathan had turned to look at her and didn’t therefore have the opportunity to get a really close look as the car passed them. However, he did look back after they had passed the creatures, and saw that the two were apparently over behind the fence on the edge of a cornfield.

Mr. Donathan described the creatures as straight and a little slight in build, but in proportion to their heads. He did not recall the hands or feet, but got the impression that they were wearing tight fitting silvery suits.

Mrs. Donathan became so excited that she drove several blocks past their home, and when she stopped, Mr. Donathan suggested that they go back to see the little fellows. He took over the wheel and they drove back, but the creatures were nowhere about. They did see unidentified flashing or pulsating lights at a 45° elevation in the north, but attached no significance to them after what they had just seen.

The Donathans went into Hartford City where they reported their experience to the sheriff’s office. Deputy Sheriff Ed Townsend was on duty and with him was a friend, Gary Flatter, who is a wrecker driver and the owner of a service station in Hartford City. A state policeman, who did not wish to be identified, also was present when the report was made and when the Donathans finished their report, he got into his car and went out to the area. Townsend and Flatter headed in the same direction in Townsend’s patrol car.

Flatter, in his report, said that when he and Townsend reached the intersection where the Donathans had allegedly encountered the little creatures, they heard a high frequency sound. They ultimately covered considerable territory looking for the little men, but the sound was only heard in that one place.

It was getting late, so the three men went back to Hartford City. Townsend remained in town, but Flatter and the state policeman decided to go back out and check again. The policeman drove his cruiser and Flatter took his wrecker. When they reached the area where the Donathans had had their experience, the policeman continued on further east, but Flatter drove up and down the road looking along both sides. The high frequency sound was still heard in the one particular area.

Going back west on Highway 26, Flatter decided to turn south on Highway 303 and check the area a half mile south, and turned on another road which runs east and west. Heading east again, he was forced to slow down to avoid hitting what appeared to be a virtual exodus of animals coming from the north side of the road to the south. He said there were six or seven rabbits, an opossum, a racoon, and several cats. As he slowed down, he began to watch both sides of the road carefully and finally spotted what he had been searching for, just as he became aware of the high frequency sound again.

On the north side of the road, in a field, were two human shaped entities. They appeared to be about 4' tall and wearing tight fitting silver suits. Flatter stopped his truck and backed up until he was about 75' short of them because he could see them best, just in range of his headlights. When he was closer, the light glared off the suits making viewing difficult. Flatter observed them for a while, then decided to use his spotlight. When he turned it on them, the beings turned toward him. The glare of the silver suits was blinding, so Flatter turned off the spotlight. The entire description included the following:

The heads were egg shaped, they appeared to be wearing masks which looked like a gas mask from which a hose about the size of an ordinary garden hose extended down to their lower chests. He saw no facial features or ears, the arms just seemed to end, and no hands were evident. The feet appeared to be rectangular and box like about 3" by 6" and about 2" thick.

After Flatter used the spotlight, the two figures began to hop about. They moved much slower than humans do, Flatter said, and when they left the ground, it was similar to the way a person jumps when jumping rope, but much slower. They left the ground three times, slowly coming back down, and the fourth time, they rose into the air, they continued to go and flew off into the darkness. Flatter said that he saw some red, tracer like lights, but that was all.