Night of the Living Dolls 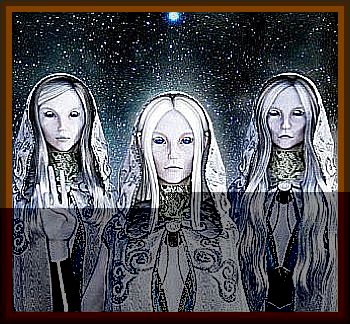 Are UFO entities able to change their size and shape at will? Or are they merely holographic projections that assume whatever fantastical form their manipulators dictate?

The strange experiences of a Gateshead housewife suggest that we should not take UFOs at face value as simple nuts and bolts machines.

Early one August morning in 1979, Carol W. lay awake nursing a toothache and waiting for her husband to return from work. As she sat up in bed drinking tea, a bright red light shone in through the curtains. She ran to the window and saw a disk shaped object sparkling with multicolored lights hovering over the street. The disk shot straight upwards into the distance and Carol went back to bed.

Moments later, a miniature replica of the UFO flew in through the window trailing a shower of glittering specks behind it. As it hovered over the bed buzzing loudly, Carol felt a tingling sensation spread across her body. Then the 18" wide disk flew out through the bedroom door and disappeared.

The tiny UFO reappeared one night a fortnight later while Carol was tucking her daughter into bed. She called for her husband, but the disk sailed out through the closed bedroom window before he had a chance to see it.

Carol was so frightened by the unearthly visitations that she went to stay with her mother, the next time her husband worked the night shift. To her dismay, the phenomenon followed her there.

She awoke at 4:00 a.m. that morning in a state of paralysis and found the minuscule UFO hovering in front of her. This time, it was accompanied by a dozen small humanoids. Although only 2' high, they were still much too big to fit inside the tiny flying saucer.

The entities wore white suits and had unreal looking hair like dolls. They approached the bed and examined Carol closely, all the while making clicking sounds at each other.

The bizarre visitations continued, much to the disgust of Carol’s dog, which went into a frenzy every time it heard the buzzing of the little UFO. The intrusions finally ceased 2 months later.

While it is tempting to dismiss Carol’s experiences as exotic waking dreams, this would explain neither the behavior of her dog nor the intense buzzing sounds often heard by other family members.