Mystery Over The Highway 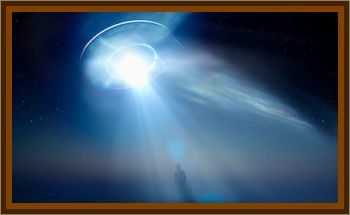 Mrs. Karen Manning was busy preparing supper. Her second floor apartment window wasopen so that she could keep an ear open for the children playing on the grass below.

Suddenly she noticed that it had gone quiet and no longer could the voices of the four children be heard. Glancing out of the window confirmed her fears, they were nowhere in sight. Dashing downstairs she found the four huddled inside the apartment entrance excitedly discussing a very strange happening. They had just seen a flying saucer, and it had tried to catch Susan.

Karen promptly separated the children and had them draw what they claimed to have seen. Allowing for age differences and some schooling the drawings were basically the same. That of a large, disk shaped craft, sensationally at a low altitude, over the highway, in front of the apartment building. It was shiny, silver and gold, whistling as it moved.

Collectively the children told a strange story. A big round plane had crossed the highway and come to a halt in the sky. It had windows, through which they saw two blonde haired females looking out. These two women had panicky expressions on their faces and tape covering their mouths, or so the children claimed.

But far worse than that was the man they saw standing at the door of this vehicle. He was a greenish color, had long pointed ears and three eyes, the one in the middle of his forehead emitted a blue light. Obviously not an eye.

Susan told how a beam of light, yellow, with sparkles, emerged from the craft and proceeded to chase her. She heard a voice say: We are going to pick you up and take you.

The other three, standing close by, claim not to have heard this. The fact of the matter is Susan attempted to escape the beam of light. After a chase around the confined grassy area she was caught, the beam lifted her 6" off the ground. Susan described the light as: Hot, burning, and cold. It enveloped her from head to waist. Next she again heard the same voice: I’m going to let you go now. She found herself back on the ground, once again.

At this point the craft began to move away in a north westerly direction, over the apartment building, towards the trees that surround the building and the power station across the river, a short distance away.

The aftermath of this event produced some strange results. Without exception all the children were ravenous, yet each child claimed they had been fed something during the event. One said it tasted like oranges, another claimed a taste of curry, a third reminded of rice and tomatoes, while the fourth said it was greasy. Despite the snack bar indulgence they all demanded to be fed, and fed now.

When Kathy’s father, Keith, arrived home around 6:00 p.m., and naturally was questioning all the excitement, he told his daughter that he intended to notify authorities immediately, which he did.

His daughter’s response was that it hadn’t happened to her, but only to the others. Both he and his wife found this very strange retraction hardly fitted the described and witnessed circumstances.

It was Keith’s opinion that the 5 year old Susan was the most credible person, in so far as she hadn’t learnt to lie. The young lady told Keith that it had all happened as described and that she was scared, because they are going to come back for me.

For reasons that seem to be lacking, Susan who had previously been a very nervous child suddenly became very confident, whereas Kathy, who beforehand had confidence to a degree, wouldn’t go anywhere without being accompanied, not even the bathroom.

Six months prior to this event, Kathy began producing very proficient art work. This comprised 30 pictures of a face. Detailed fairy drawings with a rainbow effect.

Two months prior to the described UFO sighting she stated a desire to study astronomy.

Susan had also related to her parents dreams of floating near the ceiling of her room.

Assuming that the events took place at that time and location, then we are left with an additional mystery.

The craft witnessed by the bright children was apparently hovering over the north end of the Second Narrows bridge. This all took place during the rush hour and yet, once again, no one else saw this supposedly solid craft, stationary at around 50' to 100' up.

No reports of stopped traffic, no reports period.

Kathy’s father, Keith, is originally from another country. Some years ago whilst in Quito, Ecuador, he has reason to believe he and a companion were involved in an abduction situation. His son, Harold, has reported a strange light inside the house that during the night seemed to lure him to it. He claims he resisted its efforts.