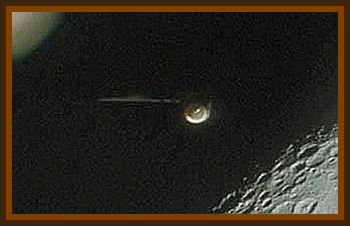 On February 20, 1962, John Herschel Glenn Jr., in Friendship 7, the first American astronaut to orbit the Earth, also became the first to report the appearance of an unusual phenomenon that he likened to fireflies.

Orbiting at an altitude of between 100 and 163 miles, and about 1¼ hours into the flight, Glenn was roughly midway between Hawaii and Australia when he added a dark filter to the clear lens of his periscope to watch the sunrise.

He would write in his memoir, I saw around the capsule a huge field of particles that looked like tiny yellow stars. They seemed to travel with the capsule, but more slowly. There were thousands of them, like swirling fireflies.

I talked into the cockpit recorder about this mysterious phenomenon as I flew out of range of Canton Island and into a dead zone before the station at Guaymas, Mexico, on the Gulf of California, picked me up. We thought we had foreseen everything, but this was entirely new. I tried to describe them again, but Guaymas seemed interested only in giving me the retro sequence time, the precise moment the capsule’s retro rockets would have to be fired in case I had to come down after one orbit.

The fireflies diminished in number as I flew east into brighter sunlight.

It is interesting that Glen’s 1999 memoir did not mention the 1969 Condon Report’s endorsement of NASA’s conclusion, that his mysterious yellowish green fireflies, that approximated the brightness of a first magnitude star, were simply local debris, millimetre size flakes of material liberated at or near sunrise by the space craft, in other words, particles of dust or ice liberated from the skin of his Mercury 6 space capsule. However, there were 3 other astronaut sighting reports in 1965 that one of Condon’s Principal Investigators, Franklin E. Roach, Ph.D., Astrophysics, had to leave unexplained, 2 from Gemini 4, and one from Gemini 7.

On June 3, 1965, Ed White and James McDivitt set out for 4 days and 64 orbits aboard Gemini 4. On orbit 3, Ed White spent 21 minutes performing the first American extra vehicular activities, (EVA, or space walk. On June 4 at 3:00 p.m. Central Standard Time, CST, somewhere over the Pacific, James McDivitt spotted a cylindrical shaped object with an antenna like extension that appeared white or silvery against the day sky. Though unable to accurately measure its distance, McDivitt had the impression that it was about 10 miles away, and that it was closing in on his craft. One still picture and some black and white film was taken of the object before it was lost to view, but the object appeared only hazily against the sky in later enlargements.

Dr. Roach rejected NORAD’s list of 11 known objects that were in space at the time of McDivitt’s sighting as unlikely candidates for the object that he had described and photographed.

Just shy of 59 hours into the flight, McDivitt again reported:

Just saw a satellite, very high, spotted away just like a star on the ground when you see one go by, a long, long ways away.

When I saw this satellite go by we were pointed just about directly overhead. It looked like it was going from left to right, back toward the west, so it must have been going from south to north.

Dr. Roach found this puzzling because it was higher than Gemini 4, moving in a polar orbit, and not identifiable as a known satellite. McDivitt also saw a light moving with respect to the starry background off the coast of China, but he could not make out any details.

Dr. Roach also examined the transcript of a December 1965 conversation that took place between astronauts James Lovell and Frank Borman aboard Gemini 4 with their Houston ground control capsule communicator Capcom.

Gemini 7: Gemini 7 here. Houston how do you read?

Capcom: This is Houston. Say again 7.

Capcom: Roger. Gemini 7, is that the booster, or is that an actual sighting?

Gemini 7: We have several, looks like debris up here. Actual sighting.

Capcom: You have any more information? Estimate distance or size?

Gemini 7: We also have the booster in sight.

Capcom: Understand you also have the booster in sight, Roger.

Gemini 7: Yea, we have a very, very many, looks like hundreds of little particles banked on the left out about 3 to 7 miles.

Capcom: Understand you have many small particles going by on the left. At what distance?

Capcom: Roger, understand that they are about 3 to 4 miles away.

Capcom: Were these particles in addition to the booster and the bogey at 10 o’clock high?

Gemini 7: Roger – Gemini 7, Lovell, I have the booster on my side, it’s a brilliant body in the sun, against a black background with trillions of particles on it.

Capcom: Roger. What direction is it from you?

Gemini 7: It’s about at my 2 o’clock position, Lovell

Capcom: Does that mean that it’s ahead of you?

Gemini 7: It’s ahead of us at 2 o’clock, slowly tumbling.

Dr. Roach interpreted this exchange to mean that:

In addition to the booster travelling in an orbit similar to that of the Gemini 7, there was another bright object, bogey, together with many illuminated particles, that could not be fragments from the launching of Gemini 7 because they were travelling in a polar orbit.

Roach pointed out that:

The training and perspicacity of the astronauts put their reports of sightings in the highest category of credibility. The 3 unexplained sightings which have been gleaned from a great mass of reports are a challenge to the analyst.

However, he felt that the first case was the most puzzling of the 3 because it was a daytime sighting of an object showing details, such as arms or antennae protruding from a body having a noticeable angular extension, it was something more than just an unusual point of light.

Among astronauts, the most vocal proponent of the ET hypothesis was undoubtedly Leroy Gordan Cooper, Jr. Cooper was one of the original 7 selected to participate in Project Mercury, NASA’s first attempt at manned spaceflight. In his autobiography, Leap of Faith, co authored with Bruce Henderson, Cooper describes his 1950 assignment to the 525th Fighter Bomber Squadron at Neubiberg Air Force Base in West Germany, and his subsequent 1951 attempts to intercept formations of 4 to 16 UFOs that overflew the Base across 2 or 3 days, generally from east to west.

However, the F-86 Sabrejets proved to be no match for the UFOs, and the intercept attempts were soon called off.

Through binoculars we looked to the sky in awe at these speedy saucers. Our worst fears were that the Soviet Union had developed something for which we had no match. And if they weren’t from anywhere here on Earth, we wondered aloud:

Where did they come from?

Cooper also relates that on May 3, 1957 he was in charge of 2 cameramen, James Bittick and Jack Gettys, these may not be their actual names, who were assigned to photograph an Askania camera precision landing system that had been installed at Edwards Air Force Base to take second by second photographs of landing aircraft.

When almost finished at Askania site #4, a saucer flew over them, hovered above the ground, extended 3 landing gear, then set down about 150' away.

The saucer was described as metallic, silver in color and shaped like an inverted plate. Being professional cameramen, they shot images with 35-mm and 4 x 5 still cameras, as well as motion picture film.

As per his orders, Cooper had the film developed, but no prints made. Before sending the developed film to Washington in a locked courier pouch, Cooper took the opportunity to examine the negatives. He found them to be of excellent quality and to contain the close up image of a classic saucer, shiny silver and smooth, just as the cameramen had reported.

Afterward, it was as if the incident had never happened.

Cooper felt that through the years, it would have been easy for me to forget the entire matter, if I hadn’t seen those photographs.