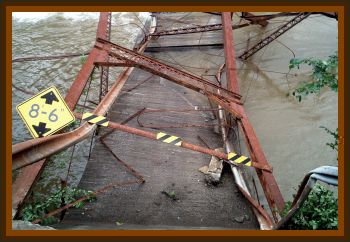 In 2007 I was on the phone talking to my best friend Travis.

I was wanting my buddy to come over to my house so we could go camping, but I had forgot that he had to help his father the next day bail hay at one of his farms, so he asked me if I wanted to come and spend the night at his house.

I said yes, so I packed my bags and made sure my mom didn’t care if I took her car. Since I had totaled my truck a few months earlier.

My mom said that she didn’t care but she needed the car in the morning to take my brother to his baseball practice, so she would take me and drop me off.

It was foggy outside because it had just rained and since I lived close to Twelvepole Creek the fog was more thick, plus it was summer so the warmth made it more foggy than usual.

Mom and I got in the car and headed down Moore Road which is also called Old U.S. 52. I rolled down the windows because it was a beautiful night and the sky was clear even though it was foggy.

As we headed towards the big curve in the road, right before we got to the bridge, I noticed a deer on the hillside which caught my attention because our road was always bad for deer jumping out in front of cars. So I told mom to watch it when she rounded the curve. As I was watching the deer and mom started around the curve, I noticed out of the corner of my eye, a very bright light which appeared bright and a dull green in appearance, but was just out of my sight because of the hill in the curve.

As we rounded the corner, there were 6 lights all together, 3 each in a triangle. When we rounded the curve, and our headlights pointed towards the object, the lights shut off, as if someone had hit a light switch.

My mom quickly slowed the car down and asked me if I had seen what she had just seen. I said yes and she stopped the car and rolled her window down and we both looked for maybe 10 minutes but we couldn’t see anything, so we continued to Travis’s house.

When I got to Travis’s, I told him about what I had seen and my mother told him what she had seen. My mother is a very religious woman, and would never lie, and isn’t superstitious either.

I believe in ghosts and believe maybe there are things we can’t explain that happen.

Travis was, and is a believer in the paranormal and talked with me for hours about what we had seen, and we spent the night looking on the internet at videos of other people who had videotaped green lights similar to the ones I had seen.

Finally we went to sleep and woke up in the morning to the smell of his mother’s cooking.

We ate breakfast and watched television for a few hours when the phone rang, it was my father.

Travis’s mom handed me the phone. My dad told me that if I go anywhere I didn’t need to take the road where the bridge was, because last night the bridge had collapsed around 4:00 a.m.

I hung the phone up, not putting that 2 together until hours later, but eventually it crossed my mind that maybe the lights I had seen the night before and the bridge collapsing had something to do with each other.

To this day they can’t determine how the bridge collapsed. First they thought that maybe the truck had caused the bridge to fall due to an antenna catching on the bridges steel frame, but the bridge was too strong to fall because of that, and the truck was well under the weight limit of the bridge.