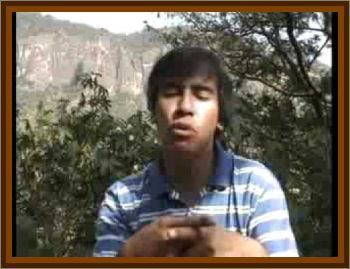 In Tepazin, Mexico a sequence of events changed Carlos Diaz forever. Several times he apparently saw red objects and made contact with their occupants. These encounters have carried on ever since. The red light seen by Carlos have been seen by the inhabitants of the area in the mountains around Tepazin, especially around the Sara Delaluz Mountain. Even today there are locals who claim to have made sightings, but Carlos is the only one who said he's made contact. Carlos says that the visitors are preoccupied with the ecological state of the planet, and the changes brought about by our nuclear activity. Many species become extinct every year. They limit themselves to observing and they can't intervene directly. They respect our free will.

I had seen the light descend a number of times. I had seen it above the heights of the mountain Sara Delaluz. Then it came down. I was hoping that something would happen and that I might reach someone from the craft. I felt a particular sensation in my chest, the feeling like when you are in love. Then an object suddenly appeared. They were objects made of light, light that shown from the center. Strangely all the light was contained within the object. I saw a metallic object, but even that became bathed in light. The thing that surprised me the most was that the parts moved from the solid state into thin light, and then back again. I saw it as a beautiful cloud, clearly defined with millions and millions of luminous points. It was a spectacular sight. Entering the object was really something. There was nothing to see except light. The most frightening thing for me was when I tried to touch my head. I noticed that my hand went right to my head before I realized I was making a gesture. It meant that even my body had transformed into light. I could see creatures, beings of form that they had taken on and come amongst us. They looked like us, they changed like us to be able to understand us. They are studying us.