Military Cover Up of the Dexter UFO Incident 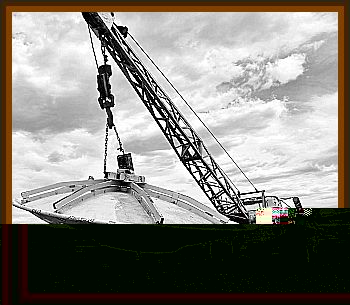 A cover up is an attempt, whether successful or not, to conceal evidence of wrongdoing, error, incompetence, or other embarrassing information.

The powers that be are anti flying saucer and to stay in favor, it behooves one to follow suit.

The same day, the U.S. Air Force and Civil Defense begin an investigation into the incidents.

Colored lights catch the attention of Frank Mannor and his son, Ronald, in a wooded swamp on the farm where they live. Both men run to the strange object and report it to the police.

We got a call that the Mannors out in Dexter seen a UFO, recalls Doug Harvey, Washtenaw County Sheriff at the time, in an interview with the Ann Arbor District Library.

“So I went out there, and the grass was down flat in a round circle…and they said they definitely seen an object come down and lift off.

We got to about 500 yards of the thing. It was sort of shaped like a pyramid, with a blue/green light on the right hand side and on the left, a white light. I didn’t see no antenna or porthole. The body was like a yellowish coral rock and looked like it had holes in it, sort of like if you took a piece of cardboard box and split it open. You couldn’t see it too good because it was surrounded with heatwaves like you see on the desert.

The white light turned to a blood red as we got close to it, and Ron, his son, said:

Look at that horrible thing.

Frank Mannor and his son, Ronald, plus 40 to 60 others including 12 policemen, saw hovering over a swamp about 1,500' away a brown luminous car sized object, with a scaly or waffled surface, cone shaped on top, flat on bottom, or football shaped, and 2 bluish/green lights on right and left edges that turned bright red and helped illuminate the object in between.

Lights blinked out and the object reappeared instantly across the swamp 1,500' away. The whole object lit up with a yellowish glow at one point and also rose up 500' then descended again. After 2 or 3 minutes of viewing, when 2 flashlights appeared in the distance the object seemed to respond by flying away at high speed directly over the witnesses with a whistling sound like a rifle bullet ricocheting. Object remained in the swamp area for 30 minutes.

Robert Hunawill, a patrolman with the Dexter Police Department, saw the same object perform a series of passes over the Mannor swamp. Hunawill described the thing as having red and white lights, which changed to a bluish tinge at times. While he watched, the object was joined by 3 other aerial craft, and all 4 flew off together.

Sheriff’s deputies Stanley McFadden and David Fitzpatrick also witnessed the craft in the sky over North Territorial and Mast Roads. The officers turned their spotlight on it.

It was the size of a small house, kind of pushed down flat, McFadden reported. It had red/green lights on it and movements which could not possibly have been made by any aircraft I’d ever heard of.

Soon, UFOs were being spotted everywhere. Washtenaw County Sheriff Douglas Harvey’s office was bombarded with reports of UFOs faster than officers could respond. Accounts of unidentified aerial phenomena quickly spread throughout the midwestern states coming in as far away as Kansas.

Dismissed at first by many as a hoax gaining momentum, then as a mass delusion of some kind, the sightings continued pouring in by more credible witnesses. Something strange was happening that couldn’t be denied.

The U.S. Air Force, the government agency assigned to investigate anomalous aerial phenomena at the time, sent in astrophysicist Dr. J Allen Hynek of Northwestern University to investigate the matter at ground zero. Dr. Hynek arrived in Dexter and found what he later described as near hysteria.

1) Determine if UFOs were a threat to national security.

A professor Hynek came to our jail and introduced himself, recalled Sheriff Harvey.

I’m from Washington, and I’ve come down to inspect that site about the UFO.

So I drove him out there, and he looked at it and talked to the Mannors. He got back in the car, and I said:

What do you think?

As soon as we got back to the jail, he had a call from Washington, continues Sheriff Harvey. He went in my office. 20 minutes later, he comes out of my office, and he says, the press was there:

We have definitely discovered that it was swamp gas.

Hynek had suddenly gone from:

I really don’t know what it is to it was swamp gas, in a matter of minutes. And that’s where it died, says Harvey.

Under pressure to give a public explanation, Hynek explains that some of the recent sightings were mistaken observations of the moon and stars at a press conference. The Dexter sighting at the Mannors and one in Hillsdale were swamp gas.

Marsh or swamp gas is produced by rotting vegetation. Dr. Hynek explained that:

This gas can be trapped by ice and winter conditions and may be released in some quantity when a spring thaw occurs. No heat is felt, and the lights do not burn or char the ground. They can appear for hours at a time and sometimes for a whole night. Generally, there is no smell and usually no sound, except the popping of little explosions. Sometimes the lights are on the ground and sometimes floating above it.

Officer Robert Hunawill and his wife saw these strange lights in the sky on Baker Rd., near Nuttle Tool & Die, between Midnight and 1:00 a.m. Monday morning, March 28. The instantaneous photo was taken by Hunawill, who said the lights were moving all the time. The lights were observed for 5 or 10 minutes at the most, according to Hunawill.

Reporters pointed out that numerous recent sightings did not occur near swampy areas, however. Dr. Hynek did not attempt to explain those incidents.

With all due respect to Dr. Hynek, I’m not ready to accept this weak excuse of gas from marshes, Sheriff Harvey states. The Sheriff also tells reporters that Hynek received a call from Washington the night before telling him to make a public statement the next day.

Of all the responses to Hynek’s disclosure, Mrs. Frank Mannor cut to the heart of the matter, stating simply:

I think there’s something going on the people don’t know about.

Hynek’s statement outraged many people, most notably the witness at the center of it all.

I spent time on army maneuvers in the swamps of Louisiana during World War II, Frank Mannor told the Ann Arbor News. I’ve seen plenty of swamp gas. This wasn’t it. We saw what we saw, all right.

Frank Mannor and son Ronald describe to reporters what they saw.

The public also spoke out. In a letter to the Editor in the March 29, 1966, edition of the Ann Arbor News, Lawrence Espey, Ph.D., wrote of witnessing a bright crimson light near Ann Arbor’s VA Hospital.

The strange looking object made maneuvers uncharacteristic of aircraft and was observed by another independent witness whose report was in the Ann Arbor News. In his letter, Espey does not conclude that what he saw was a UFO, but he takes exception to the idea that such phenomena are swamp gas.

His challenges to the swamp gas conclusion include:

Why does it appear to glow rather than flame?

Methane burns with a colorless flame. What determines the color of the ignited gas being observed around Ann Arbor?

Since gas normally has neither independent shape nor volume, but tends to expand indefinitely, what are the unnatural properties of swamp gas which allow it to remain as a dense, uniform sphere at altitudes over 1000'?

What propels the gas during the rapid unpredictable maneuvers commonly described by viewers?

Why do the spheres of ignited gas sometimes terminate in a high velocity dive to the ground? It seems like a burning gas would rise.

10 years after the Dexter UFO sightings, Hynek wrote in his book, The Hynek UFO Report, about the Air Force’s strategy to cover up unexplained aerial phenomena. He explains that sharp intra agency disagreements brought the Air Force to the hardened stance that, given our advanced scientific knowledge, these sightings very nature and purported behavior had to be complete nonsense. By 1948, the Air Force’s anti UFO policy, as Hynek calls it, was firmly in place.

Once the decision was made that UFOs had to be figments of the imagination, the Air Force policy on UFOs never changed direction. It can't be, therefore it isn't, became the guiding principle, and anyone associated with Blue Book, from Director down, learned to follow suit or else.

Mentioning the Dexter incident by name, Hynek explains how this policy stifled any critical examination of what might actually be happening.

Even though the shifting winds of public opinion about UFOs often reached gale proportions, especially at such times of great concern as the great UFO scare over Washington, D.C. in 1952 and the Michigan swamp gas episode in 1966, the Air Force held firm, like a rusted weather vane that stubbornly points in one direction only.

The Air Force, it would seem, was acting, or not acting, according to the government policy of the day. The Dexter Leader reported on March 31, 1966, The United States Congress has been reluctant to investigate the UFOs. If an investigation is launched, Congress will appear to give credence to the idea that there is more to the UFO sightings than a mistaken sighting of natural or human made objects.

To refuse to investigate opens Congress to the charge that the government knows what the UFOs are but is covering up.

But if the Dexter UFO sightings were passively covered up by the Air Force’s stubborn refusal to consider any possible explanation other than what it had predetermined, or if it was an active cover up intentionally devised to steer the public to an identifiable answer, what the Dexter incident did accomplish was to serve as a turning point in UFO investigation and government transparency.

Hynek explains that as a result of the 1966 Dexter reports, Congressmen Gerald Ford and Weston Vivian, both from Michigan, called for a Congressional hearing into the matter. From there, an initiative began that would diminish the Air Force’s sole control of UFO investigations by focusing on a collaborative scientific analysis of selected sightings.

Project Blue Book was closed in 1968.

It was at the end of this country lane, McGinnis Rd., in Dexter Township where the strange lights were spotted by multiple witnesses over the Mannor swamp in 1966.

Because of the runaway public interest, the Air Force failed to create a plausible alternative explanation for the incidents around Dexter in 1966. Its explanation of swamp gas was nothing more than gaslighting a canny public who knew better. Somewhat humorously, however, the investigators did create a metaphor for anything falsely reported, nothing to worry about here folks, just some swamp gas.

The Dexter UFO sightings were more than a bizarre localized event that captured the imagination. The sensation was historical because it led to a congressional hearing, which in turn was an impetus for greater governmental transparency public accountability.

We've had several incidents in Michigan in the last week, incidents that many reliable good citizens felt were sufficient to justify some action by our government, and not the kind of flippant answer that was given by the Air Force, where they passed it off as swamp gas. Michigan U.S. Congressman Gerald Ford on why he called for a congressional hearing.

The UFO hype also exposed something startling about human nature. While those who experienced it didn’t understand it, those who weren’t there knew all about it. The event also delineated between those people who accept the unknown and those who attack it.

And although we never got a glimpse into other worlds, we got a pretty good look at our own.