Man Tapped On Shoulder By Entity 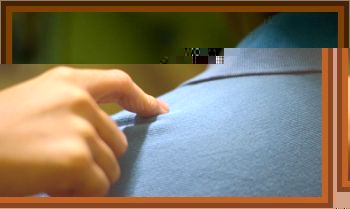 Maruis Dewilde was reading after his wife and children had retired. It was 10:30 p.m. when he heard his dog Kiki barking, and thinking there was a prowler in the vicinity of his property, he took a flashlight and went outside.

Dewilde walked to his garden, found nothing en route, then spotted a dark mass on the railroad tracks less than 6 yards from his door. He thought at first that someone had left a farm cart there. At that point his dog approached, crawling on her belly and whining, and simultaneously he heard hurried footsteps to the right of him. The dog began barking again and Dewilde directed his flashlight toward the sound of the footsteps.

What Dewilde saw startled him greatly. Less than 3 or 4 yards away, beyond the fence, were two creatures, walking in single file toward the dark mass at the tracks. Both creatures were dressed in suits similar to those of divers, and light was reflected off glass or metal in the area of their heads. Both entities were small, less than 3½ feet tall, but had very wide shoulders and the helmets covering their heads looked enormous. The legs looked very short in proportion to the height of the little "men," and Dewilde could not make out any arms.

After the first fright passed, Dewilde rushed to the gate, intending to cut them off from the path or to grapple with one of them. When he was about 6 feet from them, he was blinded by a very powerful light somewhat like a magnesium flare which came from a square opening in the dark mass on the tracks. He closed his eyes and tried to scream but couldn't, and he felt paralyzed. He tried to move but his legs would not function.

Shortly, Dewilde heard the sound of steps at his garden gate, and the two creatures seemed to be going toward the railroad. The beam of light finally went out and he recovered the use of his legs and headed for the track. But the dark object had begun to rise, hovering lightly, and Dewilde saw a kind of door closing. A low whistling sound accompanied a thick dark steam which issued from the bottom of the object. The object ascended vertically to about 100 feet altitude, turning east, and when it was some distance away it took on a reddish glow. A minute later it was completely out of sight.

After he regained his senses, Dewilde woke his wife and a neighbor, told them of his experience, then ran to the police station in the village of Onnaing, a mile distant. He was so upset and his speech so confused that the police thought he was a lunatic and dismissed him. From there he went to the office of the police commissioner where he told his story to Commissioner Gouchet.

Dewilde's fear was so evident that Gouchet realized something extraordinary must have taken place, and the next morning his report brought investigators from the Air Police, and the Department of Territorial Security. These teams, along with police investigators, questioned Dewilde and then examined the area where the dark object had rested. They found no footprints in the area, but the ground was very hard. However, they did find five places on three of the wooden ties which had identical impressions, each about 1½ inches square. The marks were fresh and sharply cut, indicating that the wooden ties had been subjected to very great pressure at those five points.

The impressions were never satisfactorily explained, but railroad engineers who were consulted by the investigators, calculated that the amount of pressure required to make the marks was approximately 30 tons. An examination of the gravel of the roadbed showed that at the site of the alleged landing the stones were brittle as if calcined at very high temperature.

And lastly, several residents in the area reported that they had seen a reddish object or glow moving in the sky at about the time Dewilde indicated that the object had left.