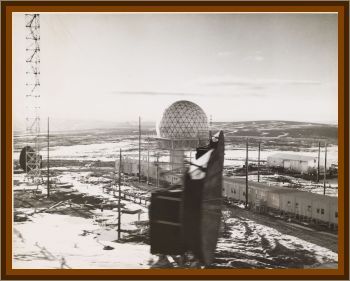 This report refers to events of many years ago. I heard you a short time back on Coast to Coast recounting similar material to which you seemed to attach some importance. Hence the following:

I was in the Air Force in the early 1950s, stationed in the Northeastern Air Command, NEAC, and assigned to the DEW Line, the string of early warning radar sites tasked to look for Russian bombers headed our way. My particular radar site was on a mountain top near Goose Bay, Labrador.

We regularly picked up UFOs, typically a few hundred miles out to the northwest of Goose Bay, and often scrambled interceptors, F-86s and F-94s, to greet them, or try to. This wasn’t because of security concerns, to my knowledge we never fired on them. We just took these opportunities to give our pilots and controllers experience in running intercepts. On a few occasions, UFOs and interceptors played tag with each other, with the UFOs winning due to their superior maneuverability. They at times would chase our interceptors. Playful fellows.

Later, I was stationed at the control center for NEAC near St. John’s, Newfoundland. We received reports of all air traffic in NEAC from the various radar sites and tracked them all on a large plotting board. I once asked one of the sites reporting in why we didn’t get UFO traffic and was told:

At the control centers in the States there was usually a noncom who took these reports and gathered specific information on them.

I was on duty in 1953 at the Control Center when a British airliner flying great circle from the UK to the US or Canada, encountered a UFO a bit south of Greenland. The case is well known. The object was a large sphere surrounded by six smaller ones. The small ones merged with the large one which then abruptly accelerated away at a very high speed, or simply shrank in size and disappeared.

It was seen by the flight crew and all the passengers save one who was asleep. It was under observation for some minutes. The aircraft landed at Gander, Newfoundland, where the crew and, I think, some of the passengers were debriefed by RCAF and USAF personnel.

In returning to the United States in late 1953 or 1954, an AFSC order required that we say nothing about our UFO experiences. UFOs were apparently a secret. Then, however, being subjected to official ridicule of the phenomenon, I learned the government lies to us and never thereafter believed much of what the government had to say about anything.

I am not a UFO buff and seldom follow the UFO news. I know they exist and give evidence of intelligent control, and that’s about it.

I was a pilot in the 1960s and ‘70s and did a fair amount of night flying. Knowing these things are out there, I kept my eye out for one but never sighted one while flying.

In 1975, however, I was just about ten miles or so south of Daytona, FL, driving northbound on I-95, when I finally saw one. It was after sunset but severe clear. Out of the corner of my eye I saw a red light to my left, the west, and assumed it was on a radio antenna which was near the New Smyrna airport just to my left.

I often flew in and out of that airport and recalled that the antenna was in fact a few miles farther to the north at the Port Orange airport. Surprised, a UFO maybe?, I pulled to the side of the highway to observe the orange light more carefully. It was just near or slightly above the palm trees on the opposite side of the highway, so perhaps about 20° above the horizon. It was moving very slowly, either a relatively small object close in or a large object more distant, no way to tell which, but it appeared spherical and not a point source.

It blinked out several times but returned and began moving somewhat more rapidly to the northwest, and vanished in the distance. There was no noise or any other phenomena associated with the observation.

That’s the limit of my direct experience with UFOs. But the sighting near New Smyrna was certainly of an unknown object of some kind.