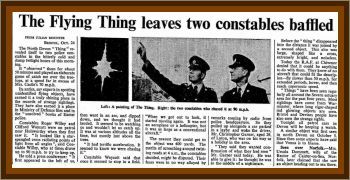 Roger Willey and Clifford Waycott, chased an apparent UFO in their police car along country lanes at up to 90 mph in the early morning hours.

It looked like a star spangled cross radiating points of light from all angles, Constable Willey stated. It was travelling about tree top height over wooded countryside, on the A3072 between Okehampton and Holsworthy, Devon. We drove towards it and it moved away. It then led us on a chase as if it was playing a game with us.

Intrigued they began to chase the UFO, however they were never able to significantly gain on it. At times the object slowed to 50 mph and at one point came to a stop in mid air. The pursuit involved speeds of up to 90 mph and covered a distance of 14 miles. Whenever they did gain a little ground on the object it would simply accelerate away from them.

Eventually they reduced their speed fearing an accident themselves. The closest distance they reached to the UFO was 400 yards. At one point they stopped at a farm to wake up the owner so they could gain some corroboration that they were not mistaken in their sighting.

The light wasn’t piercing but it was very bright. It was star spangled, just like looking through wet glass and although we reached 90 mph it accelerated away from us. Before the object disappeared from view they saw a second UFO that was also cross shaped, very bright and made no noise. Both officers were impressed by the relevant speeds of the objects as they quickly departed, especially the first one.

Enquiries at nearby RAF Chivenor proved negative. Within 48 hours numerous other witnesses began to report sightings of similar objects. A fiery cross was witnessed above the skies of Glossop, Derbyshire by six police officers.

Roger and Clifford, meanwhile, say they didn't imagine their sighting and they're still waiting for a logical explanation.

No explanation has been given to us by anybody and we haven't asked, said Cifford. We've just gently been asked to sweep it under the carpet. It didn't happen, that's what they said. But we know what we saw, he continued.

Assorted writings about this, or similar sightings:

Okehampton, Devon. Two uniformed officers in a patrol car observed a fiery cross shaped UFO above the town. One of the officers was a police photographer but he did not have time to get a picture of the object as the duration of the sighting amounted to only a few seconds.

Okehampton, Devon. Only two days after his involvement in the famous high speed police UFO chase, PC Roger Willey, observed a similar star shaped UFO in the skies above Okehampton. It was seen to drop down low as if to land in the area it was originally seen. The sighting was very brief lasting only a few seconds.

Sussex and Oxfordshire. Following reports by several members of the public, including an RAF Wing Commander, police officers across the counties of Sussex and Oxfordshire observed a fiery cross UFO. One of them, a motor cycle officer, PC Bryan Cawthorne, observed the UFO between Ringmer and Halland having initially thought the object to be a star. He pulled over to the side of the road to getter a better look at it and described its motion as slowly moving forward and backwards. He definitely confirmed that the object was actually moving by lining it up with a telegraph pole. He reported the incident to his control and was informed that other officers had also reported seeing the object.

The following two sightings took place within two days of each other across the counties of Devon and Sussex, at a time when sightings of fiery cross shaped UFOs were being widely reported in the media.

Devon, A uniformed police officer, PC Keith Droudge observed a UFO and said of his sighting:

There is no doubt in my mind. It was a UFO. It wasn’t a plane. We’ve seen enough planes not to be fooled like that.