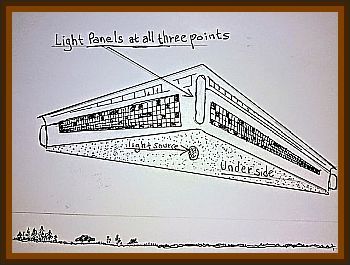 In 1977 I was a 23 year-old Air Force NCO stationed in rural Missouri. A friend and I planned a two night wilderness camping trip to Devils Den in NE Arkansas.

Late on the evening of our first night out we were discussing killing our campfire and going to the tent for the night.

That’s when my friend noticed three bright stars low on the western horizon. They were bright and formed a tight triangle. We were arguing about what it could be when it moved. It rotated as if on an axis and began a ascent into the night sky. It was a crystal clear night with a billion stars. As this triangle climbed higher it grew in size.

The area inside the triangle was jet black. Much darker than the surrounding night sky. As it passed over a field of stars they would blink out and then blink back again when it had passed.

We were not the least bit frightened. I recall a sense of calm washed over us. It was almost like sedation. We were camping on a summit in a meadow and this thing was headed in our direction. In a short while it was directly over our heads.

It was enormous. It was a city block long on all three sides and five stories tall, as large as an office building. There were light panels on each point that ran from top to bottom. There were hundreds of windows and about a third of them were brightly illuminated. We could see movement and shadows behind. It stopped and hovered in midair 30 feet off of the meadow floor. There are gaps in my memory and it doesn’t play out in my mind as a seamless narrative but rather diced up into vignettes of memories.

We were onboard this enormous spacecraft and standing frozen. All I could move was my eyes. There were smaller grey beings herding us about. I saw a taller grey entity about six feet tall. He was humanoid shaped and seemed to be in charge of things.

As I strained my eyes hard left, by happenstance he turned his head to the right and we locked eyes. In a millisecond I felt it was scanning me. I felt naked. It was like it knew all of my thoughts, plans and memories. Behind his eyes I could perceive nothing except intelligence. This thing was raw intellect. I was in no position or state of mind to engage it in dialogue. It was absolutely terrifying. So much so that 40 years on I still wake up screaming once or twice a year.

We were transported back near our tent. We lay there watching this thing, afraid to move. It lifted off about like a hot air balloon and went straight up. We were too scared to leave the tent until it had been gone for a half hour.

I left the Air Force and completed college and law school. I made my living in the law. This was a secret shared between my wife and I for 40+ years. All our kids knew was that dad had bad nightmares but that’s all. If I had stepped forward and announced what happened to me it would have been the end of my legal career. I retired as an Assistant Attorney General for the State of Vermont in 2012. I waited until 2018 to publish an

account of what happened to us. I wrote a book INCIDENT AT DEVILS DEN on Amazon. It tells the entire story and every word of it is true.

Below is a drawing I made in 1978 of what we saw. Note the car and tent lower left for scale.