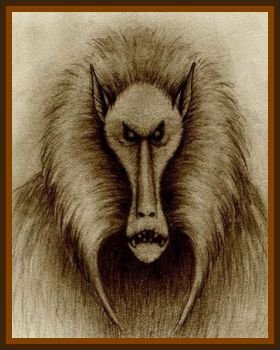 Many people have seen strange creatures in association with their alien contact.

The frontiers of North America carry endless reports of Big Foot type creatures under a variety of names depending on geographic location of the sighting. Reports from South America for nearly 100 years have been focused on a dog like creature known as the Chupacabra.

Ireland has its legend of little people who live in the woods. Scotland has the mysterious Loch Ness Monster.

Abductees have reported seeing elves or other unusual creatures sprinting alongside their cars or standing on the side of the road. Cryptozoology is the term for strange animals or creatures reported to exist without any viable proof.

This does not mean that everything unusual is necessarily paranormal, or that all things appearing to be paranormal are necessarily true. Since the topic of alien abduction also includes many paranormal aspects, the following report is highly controversial and speculative.

On January 12, 2006 I walked into my home to find a devil like creature violently attacking my 6 year old labrador dog. This creature seemed to be an unsual combination of a monkey, wolf, and devil. There was a camera nearby so I grabbed it and snapped a picture of it.

Shortly after the photo was taken the creature sprang to its hind legs and ran nearly pushing us over to get to the open door I had just come through. This creature seemed to have long fangs, monkey like tail, and extremely bright glowing eyes.

Lately around my neighborhood there have been many reports of missing cats and small dogs and reports of a creature matching this creatures description hanging in trees by its tail.

An Ohio woman driving through Roanoke, VA at about 2:30 a.m. reported a similar encounter in the late 1990's while driving on a dark road at night and forced to take a detour due to road construction. She had driven past a road sign that read:

Close to Elizabeth City when a creature, which was not a wolf, leaped in front of her car.

The creature was all black with very short sleek fur, pointy ears and had a long thin tail. She described it as catlike, and yet not like any cat she had ever seen. The snout was flatter than a dog's and more like a cat's. The creature was very tall, because she saw it when it was standing on its hind legs and was easily 6' tall. She indicated its torso looked very much like that of a very thin man and its head resembled a man almost with a pointy beard. However, the creature's hind legs were like a wild cat or dog. It was very muscular and thin.

Later, the woman checked with the U.S. Game and Wildlife Department who told her there were no black wolves in the area, but suggested she had seen a feral dog, feral meaning wild, or a wolf dog hybrid. But the woman was emphatic it was not a wolf.

The woman explained the creature may have been on all fours just before leaping. The creature leaped with such force and height that it only took one bound to make it across both lanes of the highway. This indicates the creature leaped more than 18' to get across the road. Dogs and wolves do not leap this far in one jump. Even larger animals such as deer usually take several bounds to leap across a road.