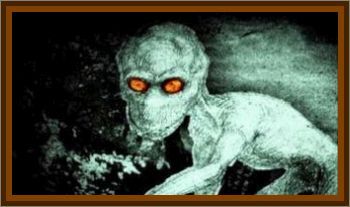 At approximately 10:30 p.m., a young man by the name of Billy Barlett, along with two friends, were driving down Farm Street near Dover. As the teenagers drove past a loose, stone edifice, known as the Farm Street Wall, Barlett noticed some movement out of the corner of his eye.

At first he assumed that the motion was caused by a dog or some other animal, but as his headlights bore down on the creature, he realized that it was like nothing he had ever seen.

Barlett would later describe this entity:

It was not a dog or a cat. It had no tail. It had an egg shaped head. It looked like a baby’s body with long arms and legs. It had a big head about the same size as the body, it was sort of melon shaped. The color of it was… the color of people in the Sunday comics.

Barlett also stated that the creature had large, orange eyes and a hairless body, with what appeared to be a rough textured skin, and a bloated stomach. He further elaborated that this animal had large hands and feet, complete with elongated digits, which Barlett claimed the creature used to grasp the loose rocks along the wall.

Later Barlett drew a picture of the thing next to the wall and annotated the illustration with this quote: I Bill Bartlett swear on a stack of Bible’s that I saw this creature.

As if this account weren’t fascinating enough, only 2 hours later, and approximately one mile away, 15 year old John Baxter, while walking down a stretch of road en route home from his girlfriend’s house, spotted what he described as a child like figure moving toward him from down the street. When the figure noticed Baxter, it fled into the woods adjacent to the road.

Baxter, fearing for the welfare of what he assumed was a sadly deformed neighborhood boy, pursued the creature through the dense cluster of trees, over a shallow brook and across a field. It wasn’t long before Baxter lost sight of the figure and finally halted at the bank of a shallow gully to catch his breath.

According to his own account, it was then that Baxter’s gaze fell across the gully and he saw his first clear view of the creature, which was supposedly leaning against a tree across the gap.

As I was looking really close there I could see the eyes it was looking at me, I just stared at it for a few minutes and then I just got all these thoughts that maybe it was something really strange. Cause, you know, nothing ever happened to me like this before, so I didn’t know what to think. I finally got the thought that maybe it wasn’t as safe as it looked, cause the way it was staring at me, it just seemed like it was, I don’t know. I got all these feelings that it was thinking to itself, or waiting to spring, or whatever, you know? I backed up the bank kind of fast, and my heart started beating really fast.

Baxter, who left the area in a panic, drew the animal that night and later described the creature to authorities, giving a description which matched Barlett’s account down to the last detail, including the huge, orange eyes. In the ensuing media circus, Baxter insisted that he had reported his encounter without any prior knowledge of Barlett’s sighting.

The third, and final, encounter that the residents of Dover would have with this creature occurred the following evening, when the thing was spotted by 15 year old Abby Brabham and 18 year old Will Taintor. They claimed that the creature in question was thin and sitting on all fours by the side of the road, near the edge of a bridge.

Brabham compared the beast to a bulbous headed, hairless primate:

As I looked at it, it kind of looked a minute like an ape. And then I looked at the head and the head was very big and it was a very weird head It had bright green eyes and the eyes just glowed like, they were just looking exactly at me.

Almost all of the eyewitness were asked, separately, of course, to sketch the creature which they had seen. The results were astounding to say the least. The only discrepancy between Brabham and Taintor’s accounts, and those which were given the night before, was the fact that Brabham insisted that the creatures eyes were not orange, as previously described, but green.

Some investigators have pointed out that light reflecting of an animals eyes, especially headlights, often creates an entire spectrum of hues and that this minor difference in no way devalues the eyewitness testimony. This is a problem often faced by skunk ape investigators who, more often than not, have to rely on testimony given by motorists passing these creatures in the dead of night.

According to the Boston Globe: The locations of the sightings, plotted on a map, lay in a straight line over 2 miles.

The Dover Demon went on to gain worldwide attention, and drew comparison to stories such as that of Bigfoot and the Loch Ness monster. Cryptozoologist Loren Coleman coined the name Dover Demon in April 1977.

Some suggested that the creature may have been a foal or a moose calf. Police told the Associated Press that creatures reported by the teenagers were probably nothing more than a school vacation hoax.

Coleman rejected the theory that the creature was a newborn moose, citing official records of moose birthing dates and the absence of moose in Massachusetts at the time.