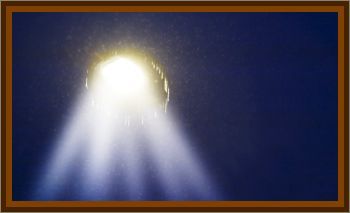 Bright object seemingly appeared out of nowhere in the Indian Ocean, miles from any land.

We were aboard a U.S. Navy destroyer in the India Ocean. It was a warm, clear, moonless night, with a few clouds on the horizon opposite our direction of movement. We were steaming at a steady rate of approximately 5 to 7 knots, seas were calm, visibility approximately 12 to 15 nautical miles.

A group of us was standing on the flight deck just forward of the fantail. Although it was quite dark, our eyes had become accustomed to the night from the light of the stars. We were facing aft, watching the wake of the ship slip toward the horizon, making small talk, when out of nowhere, a very bright light appeared just above the wake, and looked to be approximately half way between the ship and the horizon.

There were clouds on that horizon so we knew it was between the clouds and the ship, but we couldn't determine much more about it.

Because of the conditions, it was virtually impossible to tell how big it was or how far away it was. If I had to make a guess as to its size, maybe a pea held at arm's length.

We couldn't discern any shape due to its brightness. It was brighter than Venus ever appears, almost brilliant but not blinding, and at first it seemed to be stationary. It was silent, as far as we could tell. But as we watched, it began to move slowly across the ship's wake from our right to our left. When it had crossed the wake, it stopped and then proceeded to move back the other way, from our left to our right.

It did this a few times and, during this time, we were shouting to each other the excitement we felt as we were trying to analyze this object and its movements:

Was it moving closer to us as it traversed the ship's wake?

Was it a solid object or just a ball of light?

Where did it come from?

How did it get to where it first appeared without anyone seeing it?

Did the ship's RADAR pick it up?

We watched in amazement for about three or four minutes, no longer.

Abruptly, it stopped its movement altogether and appeared to just hover in place. Then, without warning or any change in its appearance, or sound, it shot directly straight up into the sky and within four or five seconds had apparently traveled out of sight, or it had dimmed out.

But the general consensus at that time was that it appeared to diminish in brightness because it had traveled far enough away that it simply got too far for us to continue to observe it.

The following day we asked some of the guys in the RADAR room and they all said nothing peculiar was picked up on RADAR that evening.