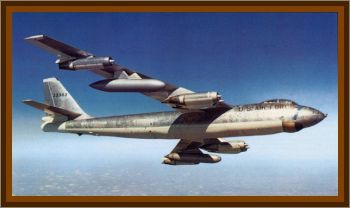 Ten years and 3 months after Flight 19 disappeared from a flight originating in Fort Lauderdale, Florida, and on opposite shores of the state, a Boeing B-47 Stratojet took off from MacDill Air Force Base, Florida, for a nonstop flight to Ben Guerir Air Base, Morocco, and vanished without a clue.

The unarmed B-47 was carrying the cores of two nuclear weapons, Broken Arrows, which means an accidental event that involves nuclear weapons, warheads or components, but which does not create the risk of nuclear war. in special transport cases. The two missing atomic cores are two of the 11 Broken Arrows lost during air or sea mishaps, according to U.S. military records.

The aircraft was on a nonstop flight eastward from MacDill Air Force Base in Florida to an overseas base. Two in flight refuelings were scheduled along the way. While the first was completed successfully, the B-47 never reached the second tanker over the Mediterranean Sea. The plane presumably went down somewhere over the Mediterranean but no trace of the plane, its crew, or its nuclear payload was ever found despite an extensive search.

A French news agency report that the plane may have exploded in flight near Sebatna in eastern French Morocco. The Air Force reported that the French position was roughly the same as the last report on the missing plane, 90 miles southwest of Oran. A later report said the plane went down southeast of Port Say, an Algerian coastal village near the Moroccan frontier. Planes and French troops were reposed to have searched the area but found no wreckage. An Air Force official also stated that ships from the Royal Navy abandoned their exercises in the Mediterranean and searched for wreckage of the plane, and troops in French and Spanish Morocco did likewise.