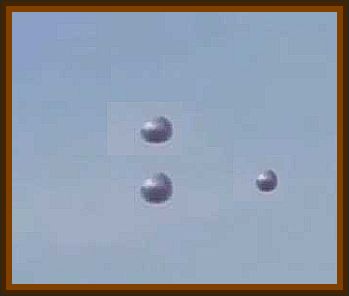 Not sure entirely of year it was, but it was a clear blue sky day. I was about 13.

Myself and my playmate were sitting on a haystack when I noticed 3 silver spheres in a triangular formation, stationary in the sky, and even at that age I knew it wasn't manmade hardware.

Every now and again one of the spheres would shoot off at an impossible speed and stop stationary, stop dead suddenly not slow down. They all did this randomly and always returned bacck to the other two to form triangular formation.

As far as I remember we watched for around half an hour, and can't remember if they disappeared or we just quit looking. I have seen documentaries on TV where someone has described the exact same thing and it was around the same era.

I've never seen a ghost and I'm atheist, but I've never dismissed the possibility of UFOs since this, and if I ever meet a god I'll ask about that time and whether it was a UFO.

The only other thing that could explain it would be a trick of the light reflected off a satellite or something.