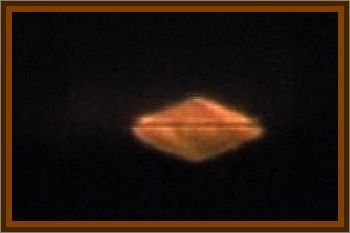 From Mr. John Martin, a farmer who lives some six miles south of this city, we learn the following strange story:

Tuesday morning while out hunting, his attention was directed to a dark object high up in the southern sky. The peculiar shape and velocity with which the object seemed to approach riveted his attention and he strained his eves to discover its character.

When first noticed, it appeared to be about the size of an orange, which continued to grow in size. After gazing at it for some time Mr. Martin became blind from long looking and left off viewing it for a time in order to rest his eyes. On resuming his view, the object was almost overhead and had increased considerably in size, and appeared to be going through space at wonderful speed.

When directly over him it was about the size of a large saucer and was evidently at great height. Mr. Martin thought it resembled, as well as he could judge, a balloon. It went as rapidly as it had come and was soon lost to sight in the heavenly skies. Mr. Martin is a gentleman of undoubted veracity and this strange occurrence, if it was not a balloon, deserves the attention of our scientists.