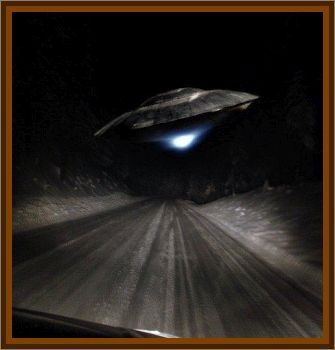 On a clear but dark summer evening Mrs. Hilda McAfee and her elderly mother were on their home by car from Las Cruces to Deming. Interstate 10 was relatively devoid of traffic. About 23 miles east of Deming the evening was disrupted by a beam of blue light directed at them from what seemed to be a short distance straight ahead, emanating from the same lane in which they were driving. The light was huge and blinding and Mrs. McAfee prepared to swerve around an object on the ground just ahead.

As she pulled around the object, the women were within viewing distance of two beings bathed in a brilliant blue light, but only gathered a quick glance at them. They appeared to be of average height and rather stocky. They were clad in pale blue, bulky quilted coveralls. Mrs. McAfee’s mother noted that they were wearing wide belts, which matched the coveralls and gloves. Mrs. McAfee said they were wearing dark boots which reached the mid calf. Both agreed that the beings were identically dressed and wore helmets similar in appearance to those worn by motorcyclists, with a dark colored window which concealed the facial features.

The figures appeared rigid and not aware of, or if so, unconcerned about, the presence of the two women. One had his back turned to the women and seemed to be working on something connected with the object located above them, while the other was turned sideways, facing him. Both were standing flat on the pavement, either beside or underneath the presumed object, and the blue light shone down on them from a point somewhere above.

At the same time the beam of light which had been focused on the two women was still glaring at them and followed the car as it drove around the beings and object.

The entire object was described as being obscure and no sound was heard. It was vaguely discerned as about the size of a truck and sitting off the ground. Mrs. McAfee said she wasn’t certain but that they may have passed partially under the in their attempt to avoid hitting it.

Following their encounter both women suffered a burning, aching pain in their chest and arms, and even their bones seemed to hurt. Both ladies thought the pain was caused by the light which was so brilliant it lit up the floor of the car and was much brighter than daylight.