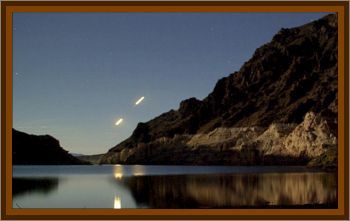 K.M. and J.P. were parked at the south end of 72nd Street, in Delta, B.C., facing an inlet to the ocean. Around 9:30 p.m. they spotted two orange colored lights estimated about 1½ miles away. K.M. got out of the Volkswagen Beetle to get a better look. The lights appeared to split in two, zoom off at a 45° angle, then return at the same speed, rather like the way a hummingbird zips around. Only now the lights seemed to be much closer. J.P. was so distressed that K.M., not to unwillingly returned to the car. He could hear no sound, even though the two lights were engaged in an erratic dance less than a hundred yards in front of them.

Turning the car around Ken drove at 80 MPH, without lights, to a nearby farm house that had its lights on. The two lights followed them at about 20' over an adjoining field, providing all the illumination that Ken required for driving. It appeared that the two lights were the size and shape of a door. Feeling that the lights were crowding him, Ken swung into the farm driveway and braked hard. In frantic haste they banged on the door of the house, the owners, Mr. & Mrs. R.W. answered their knocking. Listening to the frightened couple's story they could see two lights that have now jumped to about 1500' in the night sky and are stationary. Every time the UFO dims, the house lights go out.

R.W. phoned the Delta police. About 20 minutes later two RCMP Constables arrived. By this time the lights had now dropped below the dike. Nothing was visible, but the 4 witnesses restated the events described. Then the lights returned. One police officer was so upset he felt sick. They called to other on duty members seeking confirmation. A female officer 1½ miles away across the bay in Tsawwassen reported seeing the lights. Another officer who drove up towards the end of the display at around 11:00 p.m. stated that although he saw nothing, he did notice that the geese on the shoreline and the local animals seemed to be greatly disturbed by something.

A call to Victoria to a Lt. Commander revealed that aircraft from Comox were searching for a missing boat east to west of Walden Island. The aircraft had dropped 36 controlled flares, that had a 5 minute burning time.

This presumably was the official explanation for these events. It is worthy of note, however, that where K.M. & J.P. were originally parked, a large communication satellite dish was located in the adjoining field.