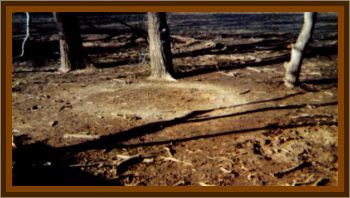 This case has never been debunked, and is still considered as one of the very best physical trace cases involving a UFO landing. 16 year old Ron Johnson, along with his dog Snowball, was tending the family sheep when his attention was suddenly drawn to a mushroom-shaped UFO appearing in the night sky. The flying object, metallic with multi-colored lights, was hovering approximately 75' away from Ron, among some trees. Johnson estimated the craft was only a few feet above the ground. He estimated the crafts diameter at 6'-8'.

Stunned by what he was looking at, he tried to get a closer look, but the brilliant luminance of the craft did not allow him to make out any additional details. Ron described the craft as making a loud sound, like an old washing machine which vibrates. The glow of the objects bottom increased as it began to rise up into the sky. Ron would later state that he was temporarily blinded by the brightness of the craft as it ascended. After he regained his sight and composure, he ran back to the family house to alert his mother and father, Erma and Durel. The bright, glowing object was now even higher in the sky.

Rons parents came running around the side of the house to get a glimpse of the unusual phenomena. They arrived just in time to see the object, now big as the full moon, as it disappeared from view. The Johnsons were shocked to see a glowing ring on the ground, right below where the craft had hovered. There was also a glowing material on some of the trees nearby. Family members would agree that the ground around the glow felt strange, like a slick crust, as if the soil was crystallized. Ron's mothers fingers went numb, like she had been given a local anesthetic. After they were sure the craft was not returning, the family settled down for the night.

When dawn broke the next day, the family immediately returned to the sight of the glowing ring, and to their surprise, it was still there, The inside and outside of the ring was damp from a rain shower, but the exterior of the ring was amazingly dry. It had a crusty appearance, as though the rain had simply ran off, leaving it bone dry. Slightly over a month later, after a snow fall, the white ice had melted both inside and outside of the ring, but the ring itself maintained the snow drift. Investigators experimented with the ring by removing snow from a section of it, and pouring water on the exposed part. The soil would not allow the water to pass through.

The Johnsons told their story to the local newspaper, The Delphos Republican. Reporter Thaddia Smith, along with several members of her family, drove back out with the Johnsons to see the site of the UFO landing and the strange ring.

Smiths report was as follows:

The circle was still very distinct and plain to see. the soil was dried and crusted. The circle or ring was approximately 8' across, the center of the ring and the outside area were still muddy from recent rains. The area of the ring that was dried was about a foot across and was very light in color. The object had crushed a tree to the ground either when it landed or took off, and from appearance had broken a limb of a live tree when it landed. the broken limb was most unusual, it would snap and break as though it had been dead for quite some time, yet it was green under the bark, and the upper area still had green leaves clinging to its branches. However the lower area looked as though it had been blistered and had a whitish cast. Later the same day, Sheriff Enlow, Undersheriff Harlan Enlow, and Kansas State Highway Patrolman Kenneth Yager investigated the ring after being alerted to the fact is of the case by Thaddia Smith. Harlan Enlow filed this report:

We observed a ring shaped somewhat like a doughnut with a hole in the middle. The ring was completely dry with a hole in the middle and outside of the ring mud. There were limbs broken from a tree and a dead tree broken off there. There was a slight discoloration on the trees. Further experimentation showed the ground under the ring to be dry to a depth of one foot. The ring itself was composed of a whitish substance, which was sent to a laboratory for analysis.

The findings were as follows:

It was resolved into fibers which was vegetal in nature and belonged to an organism of the order of Actinomycetales, which is an intermediate organism between bacteria and fungus, family actiniomycete, genus Nocardia, often found together with a fungus of the order Basidomycetes, which may flouresce under certain conditions, one possible interpretation is that high energy stimulation triggered the spectacular growth of the Nocardia and of an existing fungus, and caused the latter to flouresce.

There would also be another witness to corroborate Ron Johnsons account of the UFO. Sheriff Enlow told the press: