A Hole In The Sky 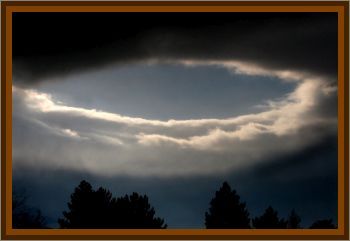 In July of 2000, my family was driving on I-90 just outside of Deer Lodge headed to Glacier National Park for our yearly summer vacation. It was about 8:00 p.m., the sun had set and the light in the sky was getting darker. It was then that I noticed a clear spot up in the sky. There were clouds in the sky, almost overcast so the colors in the sky did not vary greatly and were mostly gray.

I pointed out the object to my parents and my siblings. They all saw it. We began to wonder and speculate as to what this spot could be. It was perfectly round, high in the sky, there were no flahing lights, the color was a shiny white, almost like a reflection of light off of a mirror, however, the sun had set and we were in the middle of nowhere. It did not match any colors of the sky and definately could not be mistaken for a star, cloud, or anything in the normal evening sky. We had never seen anything like it and it looked out of place.

I said that it almost looked like a hole in the sky. We watched it for about 15 minutes as we drove up the highway then it disappered. to this day we hav no explanaion as to what it might have been.