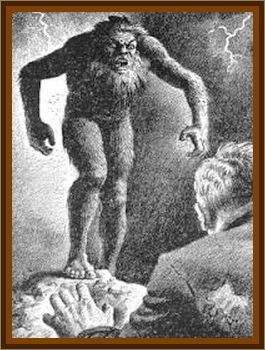 The people inhabiting the northwestern part of Nevada are at present in an intense state of excitement over the supposed discovery of the traces and habitation of a lost or wild man.

Rumor had located it upon a high and densely wooded mountain, and after gathering all the information that we could. We armed and equipped ourselves for a trip to the location described, about fifty miles from our camp, at the sink of Deep Creek. After a tiresome ride of two days over the mountain.

All were now upon the qui vive, alert, for some sign of the strange inhabitant. We had just picketed our animals, and sat by the fire telling strange experiences of the pioneer life, when we were aroused by a crashing sound, caused by the swift approach of some strange looking body coming toward the camp.

Just at this moment, the moon shone through the clouds almost as brilliant as the sun at noon day. We had a splendid view of the object. It is undoubtedly a white man, about 40 years old, nearly covered by a coat of fine long hair, and in appearance otherwise not at all startling.

He carried in his right hand, a huge club, and in his left a rabbit or some other small animal. He caught sight of us almost instantaneously, as the moon shone out, and with a scream like the roar of a lion, brandishing his club, dashed past the camp and attacked the horses in a perfect frenzy of madness.

We at this time could have shot him, but for the surprise of the moment, and ere we were armed, our animals stampeded and he was after them like the wind, down the mountain. We endeavored in vain to send our dogs after him, which, being savage and well trained, we had counted upon to assist in the capture, but with distended eyes they sat mutely gazing into the darkness, and neither blows nor kindness could move them to the chase, and the only recourse we had was to throw up a hasty rampart of logs and then station guards to prevent a surprise by the infuriated demon. Occasionally, through the long watches of the night, all hands were aroused by his terrible cries, and thus, in momentary expectation of an attack, we passed the night. Morning dawned at last, and not one would leave the camp until the rosy sunlight cheered the landscape, which we took the trail of our horses, after having securely hidden our accoutrements and provisions, excepting a lunch for a few days journey.

They had torn down the mountain at a terrific speed for about 5 miles, here they jumped down a sheer precipice about 25', disabling my saddle horse. He was lying near the bottom, mangled in a shocking manner.

The wild man had evidently vented his rage upon my disabled horse, as large strips of skin were torn off and thrown to some distance, and his lower jaw was broken. We shot him to end his sufferings.

The wild man had here given up the pursuit. About 2 miles further down the valley we found the rest of our stock quietly grazing. The only marks they bore were evidently made by being caught by the tails by the wild man in the chase, entirely stripping some of them of their hair and skin.

We now had some 6 miles to go to reach our first camp. Arrived there at 3:00 p.m., when we took lunch. After examining our arms, we started in the direction from which the wild man approached and was fortunate enough to strike his trail, with the well defined footprints of a man who would wear #9 shoes, but being broad on the bottom. We followed his trail for about 3 minutes, when the gorges opened in a beautiful basin, and a half mile further the trail ended abruptly at the entrance of a cave.

We explored this cave, finding a set of soldier’s buttons and a dime dated 1841, which leads me to the conclusion that he is a man lost from Fremont’s command in 1846 or near that time.