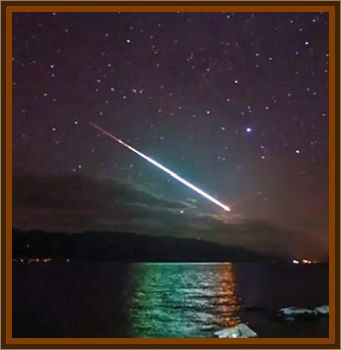 It was a night for things mysterious in the sky.

First was a meteor like object which flashed and snaked across the heavens.

Second was a sudden 40 mph gale.

Hundreds of people in all parts of the lower mainland area reported a bright flash and a long wiggly vapor trail, about 10:30 p.m.

To Mrs. L.W. Coleman of Burnaby, who was vacationing at Deep Cove, the object was like a falling star but much brighter.

There seemed to be a blue explosion followed by a long glowing trail, like the vapor trail from a high flying plane, She stated.

To her it appeared high over the North Shore mountains as she, her husband and a friend returned from a boating trip. For several minutes the trail seemed to rise in a wavy line, grow slightly brighter, then disappear.

Her experience was much the same as others.

A radio range operator at Vancouver Airport reported roughly the same thing although the log book entry in the control tower was timed at about 10:50 p.m.

Dozens of other people phoned the newspaper reporting the object.

Second mystery, the freak gale, explained this morning by the weather office forecasters, was the hot dry wind which sprang from a cloudless sky and bulleted parts of Vancouver with gusts to gale force until 2:00 a.m. today. It was almost too realistic for the audience at Theatre Under the Stars in Stanley Park. The first gusts came just as the curtain fell on a dramatic scene depicting the star of Kansas tornado which carries a little girl to the fairyland of Oz.

To the weatherman, it marked the passage of a cold front although it was so dry no cloud appeared in the sky.

No damage was reported, although gale force was reached several times.