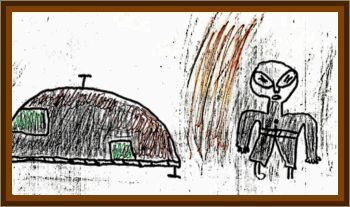 A boy and a girl aged between 11 and 12. The two children lived a quarter of a mile north northwest of the King George, the fifth reservoir, which is two miles long and half a mile wide. The two had disappeared in mid-March and later turned up in June of the same year, dead in a clump of trees, a quarter of a mile North northeast of the reservoir, less than 350 yards from a well lit main road.

Police with tracker dogs went over the entire area where the children had lived, disappeared and reappeared. It seems strange that they should disappear for three months, then reappear next to a clump of trees; which had somehow been scorched from above. You may think that this has nothing to do with UFOs, but here are the uncanny events that surrounded their deaths. Even though there is a six month period between the UFO sighting and the death of these two, you will see how the evidence matches up. Meaning that when murder as we know it is ruled out, why then did the local press, The Waltham Forest Guardian Independent print the following:

1) They died from burn marks, possibly radiation or microwaves?

2) They died from over exposure.

3) It went on to say that nobody knew how this could have happened.

4) Their bodies were not found close together, and one of the girls shoes was missing.

Isn’t it strange that the other shoe the girl was wearing was clean? U.F.O.s have been known to attack and kill animals and leave burn marks on them. There is little possibility that the sun could have left such burns. And it is equally unlikely that they should just lay down and die from over exposure. U.F.O.s hover above tops of trees and the ground and scorch the natural vegetation and nothing ever grows there again! This is the case of the trees where the children were found. Also, why were the police in the area for several weeks after the children were found, and why did they take away samples of the ground for analysis. In fact they removed part of the bushes from where the children were found.

If you drop two stones from the air they will not land in the same place or spot. As mentioned, their bodies were not found together. It's strongly believed that they came into contact with alien beings, the common denominator being the King George the fifth reservoir. It's felt that they died under strange duress and they were found at the time of a strong U.F.O. flap, a sighting every two or three weeks, in the immediate area. Some people were interviewed in June-July 1972 at Sewardstone Berry, near where her and her boyfriend were found dead off of Sewardstone, which runs between Chingford and Waltham Abbey, Essex. But to no avail they seemed to be very scared when asked questions etc.