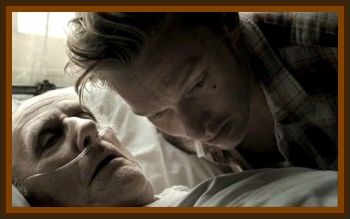 Dr. Boyd Bushman holds up one of the images he claims were taken on disposable cameras inside U.S. bases.

A dying scientist has made a bizarre deathbed video claiming he knows what is really going on at Nevada’s mysterious Area 51, and says that he reverse engineered flying saucer technology for defence firm Lockheed Martin.

Boyd Bushman made the revelations in a video recorded just before he died August 2014, along with photographs of aliens he claims were taken on disposable cameras within American military facilities.

Bushman was a research scientist at Lockheed Martin, with a number of patents to his name, although details of his biography are disputed. Bushman said in the video, recorded on August 7 this year:

With respect to the alien craft, we have American citizens who are working on UFOs 24 hours a day. We are trying to learn what to do.

It’s not the first time someone at the defense firm has claimed that secrets of alien spacecraft are being studied at Lockheed Martin. Ben Rich, a Lockheed Martin employee who pioneered stealth fighters, said:

We already have the means to travel among the stars, but these technologies are locked up in black projects and it would take an act of God to ever get them out to benefit humanity, anything you can imagine we already know how to do.

Woman finds alien in a bottle of vinegar Bushman’s confession is peppered with images of alien bodies. He claims that there are 2 groups of aliens under study at Area 51 and other sites.

Aliens have long fingers, webbed feet, and hail from a planet known as Quintumnia, Bushman says.

There are 2 groups of aliens, they divide them into 2 groups. It’s like a cattle ranch. One group are wranglers, and the others are rustlers, the stealers of cattle, says Bushman.

The ones that are wranglers are much more friendly, and have a better relationship with us.

Boyd Bushman about the existence of UFOs and aliens at face value seem to be very convincing, why would such people lie? says Nigel Watson.

Nonetheless, we must be wary of the fact that over long periods memories fade, and people can use vague recollections to reconstruct events into a story they prefer to believe or pleases their audience.

The bottom line is we still need hard physical evidence to back up these claims and without this the sceptics can still shake their heads in horror and the UFO controversy will continue.