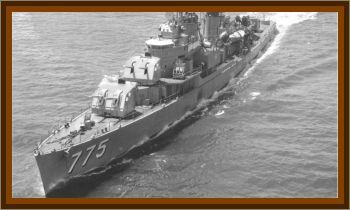 During my enlistment in the Navy, I was aboard a WWII Destroyer USS Willard Keith (DD-775). We were approximately 280 miles off the east coast of the United State in the vicinity of the southeastern portion, North Carolina. The Captain came on the PA system around 10:00 p.m. which is very rare that late. He told us that we were being followed by an unidentified flying object for the past few hours. He told us of the procedures he took contacting Naval base, which in turn investigated the incident with U.S. military particularly the Air Force, also including the Capital.

He said the report back was that it was no military or commercial plane of any country. The Captain also noted that our ship had it on radar. He told us where it was in the sky in relation to the ship and that it appeared as a very large red light.

We all observed it.

We continued to watch it then suddenly it was gone as though it were a light and switch was turned off. When that happened, the Captain came back on the PA system and noted what I just explained and then said it went off the radar screen over 6000 miles per hour.

He said he would have this recorded in the ship's log as an UFO.